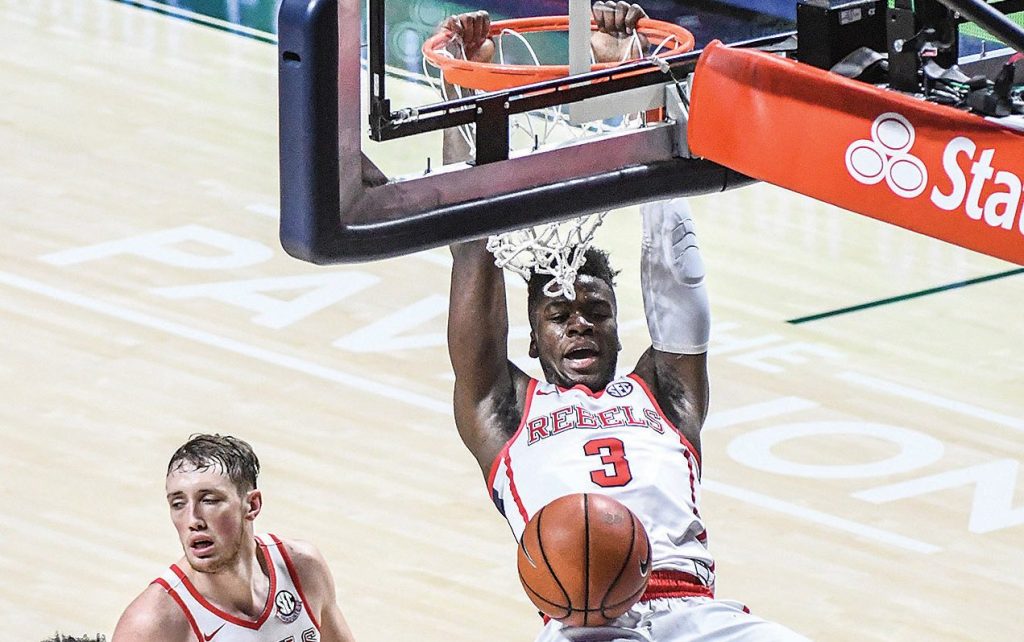 Andy Kennedy is lukewarm on the effect of halftime speeches, but Ole Miss’ coach admitted to reporters Saturday he let a bunch of colorful language fly in the locker room after watching his team play one of its worst halves of the season.

“Unless you’re working on Cinemax, you couldn’t have used it anyway,” Kennedy said.

Whatever Kennedy said, it worked.

Terence Davis scored all 26 of his points in the second half and Cullen Neal poured in 20 points, helping Ole Miss pull off the type of comeback that’s rarely happened in program history in a 90-84 win over Auburn at The Pavilion.

Deandre Burnett added 18 points while Sebastian Saiz chipped in 10 for the Rebels, who trailed by 23 less than two minutes into the second half. But Ole Miss went on a 22-8 run over the next seven minutes to trim the deficit to single digits and went ahead 70-69 on Neal’s 3-pointer with 5:20 left.

The Rebels (15-10, 6-6 Southeastern Conference) led by as many as seven after that and held on the rest of the way to notch their 10th straight win over Auburn (16-9, 5-7). The win is tied for the largest comeback in program history.

“AK knows how to light a fire under us,” Neal said. “He definitely got the job done obviously.

“I think we just came out with a different energy. We knew we were down. We knew we had to start playing, so it was a goal of ours to just come out and guard as hard as we could.”

Ole Miss shot 62.5 percent in the second half on the way to 63 points in the final 20 minutes, their highest-scoring half of the season, with Neal and Davis leading the charge. Davis didn’t score until 17:10 left in the second half but poured in baskets in a hurry, often getting out in transition with the Rebels ramping up the defense to finish 11 of 13 from the floor in the final 20 minutes.

His point total was a career-high in 24 minutes after playing just four first-half minutes with foul trouble. He didn’t start for the first time in 11 games in an effort to try to avoid exactly that.

“He fouls out in 17 minutes against Baylor,” Kennedy said. “Then he gets in foul trouble the other night against Tennessee and it’s hard for us to catch a rhythm when he’s such a dynamic player offensively, especially in the open floor. … Obviously when you’re down as much as we were, you’ve got to throw caution to the wind and put guys out there that you feel like can ignite you, and that’s what we did to start the second half.”

Neal combined with Davis to score 41 points after halftime. Neal was 4 of 8 from the field in the second half after shooting 1 of 4 in the first on his way to just his second 20-point game of the season.

Ole Miss turned Auburn over 20 times — 11 of those coming in the second half — and scored 26 points off of them. The Rebels shot just nine 3s after halftime and finished 27 of 31 from the free-throw line while Auburn was just 5 of 8 from the charity stripe.

“We just wanted to keep attacking and keep being aggressive,” Neal said.

Ronnie Johnson paced the Tigers with 18 points and eight assists while Mustapha Heron scored 16 points, but Auburn shot just 41 percent from the floor and 31.1 percent from 3-point range in the second half after knocking down eight of its first 14 3s.

“What won the game for us was getting defensive stops,” Kennedy said. “We got stops, which allowed us to get in the open floor. TD, Cullen and Dre (Burnett) were making plays.”

The Rebels started with an 8-0 lead but went 7:08 without scoring as Auburn built a 21-14 advantage and added on from there, ending the half on a 12-0 run to expand its lead to 47-27 before things turned drastically.

“Once we got to the second half, we knew we had to fight,” Neal said. “I think that’s the key word for this game is fight and not back down.”

Watch Kennedy talk about the comeback win in the video below.