After all the negative rhetoric flooding the airways and social media lately, and with February (6th) being the birth month of my hero mom “Gert,” I decided to write something familial, light-hearted and funny this month. After several frustrating attempts, I concluded that although I am laid-back, have a good sense of humor and fun nature, I am not, “funny.”

Born into a devout Catholic family in a small, rural, southern Missouri town a few miles from the Mississippi River, my daddy’s father and mother came directly from Munster Germany. Granddaddy established the first Ford and John Deere dealerships in our little town and my dad worked with him (wrenching genes). My mother’s mother and father were of French descent (Renaud) and lived on a small farm near town where they raised soybeans, corn, cotton, hogs, cattle, chickens, had a large vegetable garden and an apple orchard that sustained them, especially through the depression.

Although there was a “Grandpa,” we always referred to the farm as “Grandma’s.” Most of my fond memories as a youth are from the many hours I spent at Grandma’s, playing, fishing, hunting, and working. One day I was proudly showing Grandma my first .22, a little Stevens Favorite that I bought for $1.50 from a friend because it wasn’t working (had the firing pin fixed for $1.50) and she asked me to shoot a chicken for dinner. Well, the chickens were being chased by a rooster and not knowing much about leading at the time, dispatched the rooster. Grandma just smiled, said he was old anyway, and we ate that rooster for dinner. 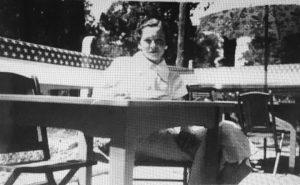 Stricker’s mother, Gert, was a registered nurse and often worked double shifts to help support the family of six.

One Christmas, daddy gave me a single shot .20 gauge shotgun. Not realizing the power of this gun, I took aim at a pigeon sitting on a rafter in the hay barn, missed the bird, and blew a hole in the tin roof! Don’t tell.

As the only boy in our family with three older sisters, one could conclude that I was spoiled. Oh contraire! The novelty of my birth quickly wore off and my sisters were done with me. Gert was a registered nurse and often worked double shifts, and although my dad was a great man, when I asked him to take me hunting or fishing, he would say that he was too old and tired. As a result, I became used to being alone and taking care of myself. I also became quite introverted, and although I can teach an Ole Miss class of 140 students, read scripture at Mass, and appear at ease in any situation, I am not comfortable.

In high school, I was captain of our very small Catholic basketball team, but daddy never walked (literally) across the street to watch me play. One Sunday we had an away game and for some reason he wanted to go so I rode with him instead of on the bus. We lost as usual, but I scored 26 points and after the game daddy came into the locker room, shook my hand, and said “Good game.” To this day that memory chokes me up as it is the only time he said anything like that to me.

Daddy died of a heart attack a couple weeks before starting my freshman year in college contributing to my introversion — but beginning my true faith journey. I mention faith in my columns, not to be preachy, but because I am a defective human, need God’s help, and is part of who I am.

Gert had a black lady named Edna come to our house a few times a week to clean, cook, and help take care of me. I loved Ms. Edna as she was funny and had a majestic soul. We teased each other a lot and she would often throw her head back (wrapped with colorful bandana) laugh, her eyes would dance, her two gold front teeth would shine, and she would say, “Oh Mr. Steve!” I think of Ms. Edna often and miss her more than most people who have passed from my life; I have a picture of Ms. Edna in front of me as I type.

With Valentine’s Day this Tuesday, I reflected on what William Glasser (Reality Therapy) stated about love: “For our health and happiness, from birth to old age, we need to be loved unconditionally by at least one other person (parent, friend, teacher, or significant other) who is in touch with reality and able to meet their own needs, and unconditionally love at least one other person.”

Amen, Love (especially your mom), Be Loved, and GO REBELS!