This is the second time in five years for Robinson to receive the top professional award for district administrators. In 2012, she received the award from the school district, where she has served as administrator for a total of seven years.

“The way that Mrs. Robinson handles challenges presented to her — whether expected or unexpected — is just one example of how her leadership style allows her to lead her team to rise to the top,  no matter what obstacles are set before them,” says OSD Superintendent Brian Harvey. 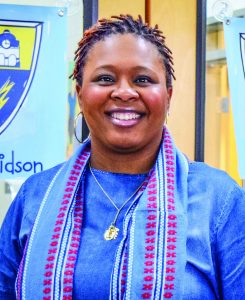 Principal LaTonya Robinson is the 2017 Oxford School District Administrator of the Year.

With 651 children in her school, it’s not an uncommon practice for Robinson to give her “woo-hoo’s” of praise over the school intercom for students or teachers doing something great. She admits she’s always good for a hug, too, especially when it comes to her students.

Under her leadership, the Oxford third- and fourth-grade school is ranked No. 2 in the state out of all other elementary, intermediate and middle schools in statewide accountability ratings. The Oxford School District is the No. 1 public school district in Mississippi based on 2015-2016 accountability scores from the Mississippi Department of Education.

“Earning the top ranking in the state is a win in which all Oxford schools contributed; however, Della Davidson Elementary School stands out as the MVP (Most Valuable Player) when it comes to our district’s accountability rankings,” said Harvey.

Robinson said that the news about the school performing at the very top among its peers and other schools was simply hard work that paid off for students and teachers.

Her career in public education began as a classroom teacher teaching language arts to fourth and fifth graders. Robinson taught for four years before she ever began entertaining the idea of becoming a school administrator. She credits her own teachers for her personal decision to enter the field of public education.

“My teachers were my role models, my superheroes,” says Robinson about her teachers. “Growing up in the Mississippi Delta, during a very interesting time, we did not have a whole lot in our classrooms. The teachers themselves were a force! You could never tell they struggled in any way; simply put, they brought their ‘A’ game to school everyday.”

Robinson attended kindergarten through 12th grade in the Clarksdale Public School District, where she says, “Our teachers pushed us, and they said, ‘You will do because I said so.’ They compelled us to be better, there was no other choice. My teachers took care of me, they took care of my needs. I wanted to be that person for another child.”

Robinson says teaching for her is eternal: she will always be a teacher.

“I love everything about teaching,” said Robinson. “For me, being a leader, being a principal did not happen as a way for me to get away from teaching. I just remember all my previous school administrators saying I needed to be an administrator. They would often comment to me that one day I would do their job.”

Robinson was the teacher that was always organized and wanted to get other teachers organized; she was the person on the school hall that other teachers went to when they needed something. At first, the thought of becoming an administrator was met with the instant answer, “No,” then things changed.