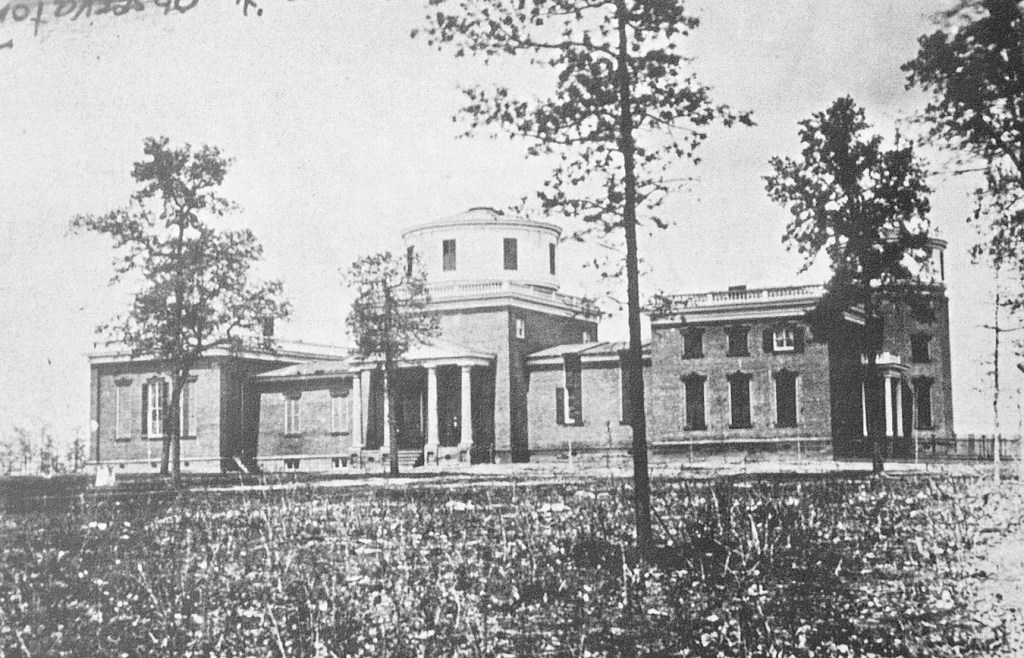 Ole Miss began construction on the Barnard Observatory in 1859. It was to be a place to house the inventory of physics apparatus that would not be surpassed by any other university in the country.

Frederick A.P. Barnard became Chancellor of the University of Mississippi in 1856 and remained in that position until 1861 when the university was closed, due to the students leaving for the Civil War. He was the first to be called chancellor. Holmes and Longstreet had been called president.

During his tenure as a professor mathematics and natural philosophy and then chancellor, he worked to make our university one of the great scientific universities in America. Barnard intended to make Ole Miss and the new observatory he was building in 1859, a place to house the inventory of physics apparatus that would not be surpassed by any other university in the country.

He had used the inventory listed in the official text of the Ecole Polytechnique in France as a list of equipment to be housed in the building, which is now the third-oldest building on the campus. He had planned not to just bring the university’s apparatus inventory up to the highest existing standards, but also to surpass those standards. (If you are interested in seeing some of the equipment Barnard purchased for the observatory, go by the University Museum).

At the young age of 15, Barnard entered Yale where he excelled in mathematics and in the languages of French, Spanish and Italian. After Yale, he taught at a grammar school in Hartford and then became a Tutor at Yale in 1830.

A colleague of his was taking a trip over to Oxford to apply for a position as the chair of the chemistry department at the University of Mississippi, which had been formed six years earlier. Barnard’s reputation had preceded him, and the Trustees asked him to apply for the vacant chair. He declined but did accept the position of professor of mathematics and natural philosophy.

On his trip back to Tuscaloosa with his friend, who did not get the position he wanted, he became physically ill while eating dinner. At their first stopping place, the two men had just sat down to dinner when Barnard excused himself. The landlady of the way stop said to Barnard’s friend, “Your friend seems to be unwell. I fear he has been unsuccessful at Oxford.”

“No madam,” his friend replied. “He is sick because he has succeeded.”

Barnard had not been at the university long when President A.B. Longstreet asked him to assist with a study of the State of Mississippi Seminary Fund, which was set up by the state to funnel funds from the state to the university.

Jacob Thompson, as a Trustee of the university, also had an interest in the fund that was reported to be as high as $874,324. They, along with Gov. John J. McRae, wanted the Legislature to account for the lost funds and make some effort to indemnify the university for the missing funds.

After Barnard spoke to a joint session of the Legislature, they did agree to make an appropriation to the university of $100,000 payable over a period of five years. By the time this appropriation was achieved, Barnard had become the third President of the university. He would make use of these funds to make the university he had come to love, a world-known university. This would come about by building a new observatory and the collection of scientific apparatus, surpassed by no other university.

Now that Barnard had the funds, he set out to build the observatory. The building was to house, in the center location, a telescope that would be the collection’s largest and most expensive piece of equipment. It was to be made to Barnard’s specifications by Alvin Clark and Sons. It was to be four inches larger than the 15-inch telescope at Harvard.

The building, as it was originally constructed in 1859, was constructed in the shape of an H. The legs of the H would point due south and north. There would be a large central dome in the center to house the large telescope.

On each end, there would be smaller domes to house a comet-seeker in one dome and a smaller telescope in the other. (One of these two smaller telescopes is now in the second observatory to be built on campus) Part of the east wing was to be the home of Barnard and his family and other Chancellors until 1971 when the Carrier Home became vacant. The balance of the building would be used for classrooms, laboratories and lecture halls.

The large telescope from Clark and Soms was never delivered to the university. By the time it was to be completed, the Civil War had broken out and the student were all gone to fight for their “way of life.”

In 1863, the Chicago Astronomical Society purchased the telescope and in 1887 it was given to Northwestern University and installed in their new Dearborn Observatory in 1889.