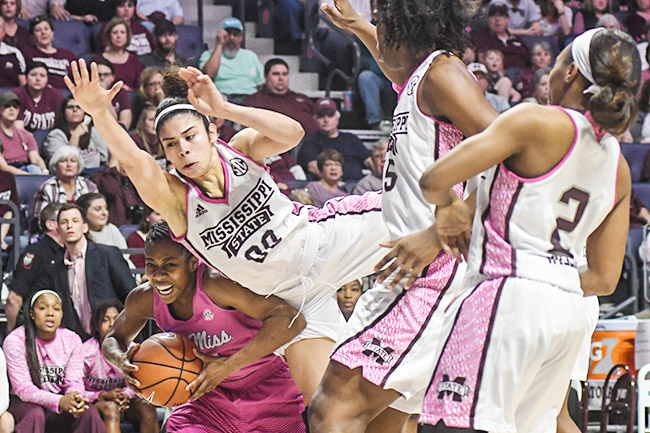 For a moment it appeared Ole Miss’ women may have a chance to pull off the upset of their season. Then, Mississippi State proved why they are a Top 4 team and a heavy favorite to make a run in the NCAA Tournament next month.

The No. 4 Bulldogs flexed their muscle with a big second quarter and defeated Ole Miss 66-44 inside the Pavilion on Sunday afternoon. It is the fifth straight win for Mississippi State, while the Rebels suffered their second straight defeat.

“When you shoot the percentages we shot out there, you’re not going to beat a team ranked in the Top 5 of the country,” Ole Miss head coach Matt Insell said. “We shot the ball extremely well at Florida on Monday and have come back home and not shot it well at all.”

The sheer size and strength of the Bulldogs (25-1, 11-1 Southeastern Conference) was too much for Ole Miss. Sophomore center Teaira McCowan pulled down a career-best 18 rebounds to help keep Mississippi State in control at the post as the Rebels struggled to make close-range shots, shooting 30 percent (16-of-54). The Bulldogs out-rebounded Ole Miss 52-37.

After a close first quarter where Ole Miss (15-10, 4-8) only trailed the Bulldogs 17-14, it was all Mississippi State from there. A 24-4 second quarter by the Bulldogs gave them a 13-point lead at halftime and was all the cushion they would need.

“(McCowan) is 6-7 and (Mississippi State) threw it to the corner of the backboard and there’s not a lot we could do,” Insell said. “There ain’t very many people that can do anything with it. You put her on that block, she’s 6-7, she’s not the greatest of skill player but she can catch and put it in the basket.”

Offense was not the specialty of the day as Mississippi State only shot 37 percent from the floor, but managed to defeat the Rebels by 22 points and only shooting 1-of-15 from behind the three-point line. McCowan led all scorers with 17 points while Dominique Dillingham scored 12 points and Victoria Vivians added 11.

The 44 points scored is the lowest point output by Ole Miss this season, along with their shooting percentage. Erika Sisk scored a team-high 14 points, while Madinah Muhammad and Taylor Manuel each scored 10 points. No other player scored more than three points for the Rebels.

“Really proud of our energy and effort,” Mississippi State head coach Vic Schaefer said. “Late in the second quarter I felt we were getting our second wind and I thought (Ole Miss) was getting a little tired. …Four points (during the second quarter) in the Southeastern Conference, you’re guarding people. You’re doing something.”

Foul trouble plauged Ole Miss early once again as they picked up 10 fouls in first quarter. Four Rebels picked up two fouls each in the first 10 minutes of play, causing Insell to have to rotate his players at a more frequent rate than he’s accustomed to during the second quarter where Mississippi State took over the game.

The Rebels return to action on Thursday when they host Auburn at 8 p.m