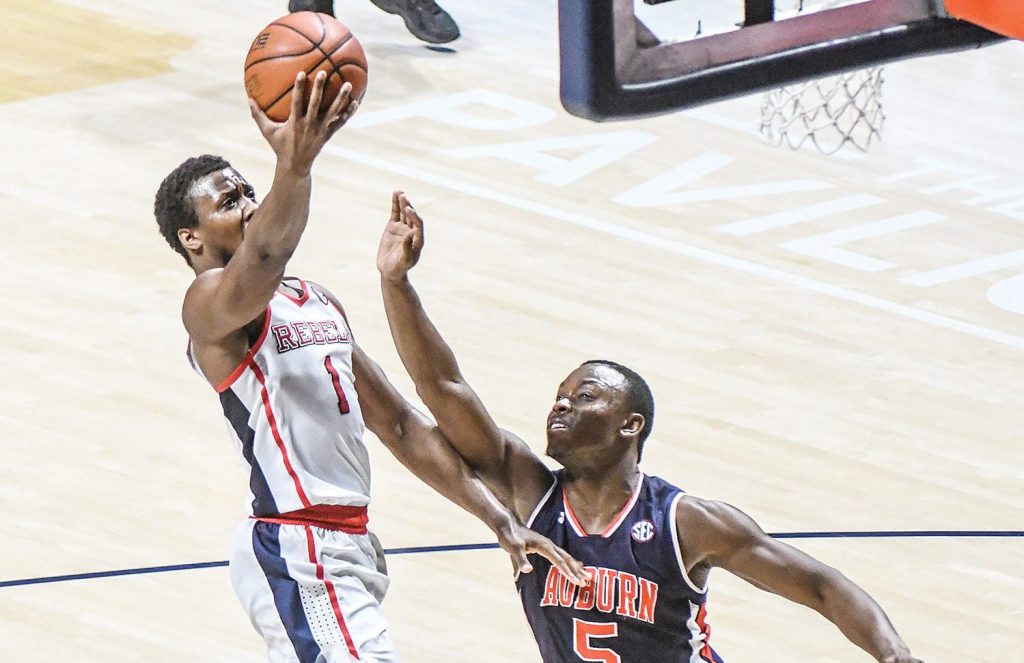 Ole Miss exploded for 63 points in the second half and clamped down on defense to rally for a 90-84 win over Auburn on Saturday at The Pavilion. The win was the Rebels’ fifth in their last eight games and got them back to .500 in Southeastern Conference play.

Ole Miss has been playing basketball for 109 years, and only one other time have the Rebels ever come back from a deficit as big as the one they faced Saturday night.

A 3-pointer from Mustapha Heron gave Auburn a 52-29 lead with 18:13 to play before Ole Miss erased the 23-point hole nearly as fast as the Tigers dug it. Ole Miss answered with an 11-0 spurt and then used a 17-4 run after getting within single digits to take its largest lead of the second half at 80-73 with 1:17 left.

The Rebels made 10 free throws after that to finish a comeback that tied a 74-67 win against Alabama in 2010 as the largest come-from-behind win in program history. Better defense (it couldn’t have gotten much worse than the first half when the Tigers were shooting, screening and cutting with ridiculous ease) led to more turnovers, which helped the Rebels attack in transition, while Ole Miss rebounded the Tigers 23-15 in the second half.

Terence Davis has had issues fouling recently, so Andy Kennedy brought him off the bench Saturday to try to keep his most explosive offensive player on the floor as long as possible. It didn’t work early — Davis picked up two quick fouls after entering and played just four minutes in the first half — but Davis eventually got in a groove doing what he does best when Ole Miss needed it.

The Rebels didn’t have a choice other than to start Davis in the second half facing a 20-point halftime deficit, and Davis went to work in transition with Ole Miss forcing 11 of Auburn’s 20 turnovers in the final 20 minutes.

Davis scored his first basket with 17:14 left with his teammates continuing to get him the ball in the open floor when the opportunity presented itself, and there was little Auburn could do to prevent Davis from getting to the rim. Davis poured in 17 points over the next nine minutes and change and finished with a career-high 26 points. All 13 of his shots came in the second half. He made 11 of them.

Davis has been the Rebels’ most consistent offensive player in the second half of the season, averaging more than 16 points over the last eight games. Davis is a blur when he gets going at full speed and is the Rebels’ best player at finishing once he gets to the rim, and he continues to be one of the best in the SEC at it.

It’s easy to get caught up in the moment of such a valiant comeback, but all it means is Ole Miss won a game at home against a team that came in tied with the Rebels in the conference standings, a necessity to keep any kind of postseason chances alive.

Ole Miss now has five top-100 RPI wins and no losses outside the RPI top 100, but a 1-8 record against the top 50 means the Rebels are still lacking the kind of quality wins that are needed for an NCAA Tournament bid. With just two top-50 opponents left on the schedule (at Arkansas and at home against South Carolina), Ole Miss may need to win out and get a couple of wins in the SEC Tournament to have a realistic shot.

Saturday was about winning and moving on, and the Rebels did that.

Next up: Ole Miss will stay home Tuesday against LSU, which fell to last place in the SEC on Saturday. Tip is set for 8 p.m. on the SEC Network.