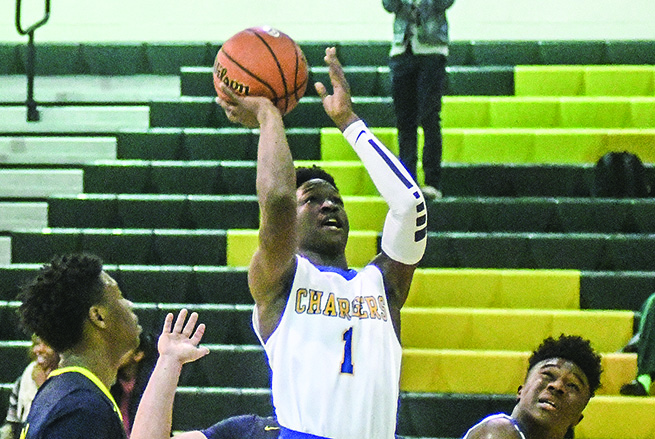 Oxford’s Jarkel Joiner has spent most of the season as the nation’s leading scorer. The senior guard has 1,002 points heading into next week’s Region 2-5A tournament. (Bruce Newman)

There was not any question as to who the key player would be for the Oxford High boys basketball team this season. That was a simple answer, but the unknown was how successful of a senior season Jarkel Joiner would wind up having. Turns out it was one for the record books.

The Chargers (21-6) finished their regular season Thursday with a win over Coffeeville for their final tune-up before the Region 2-5A tournament at New Hope High School, which starts on Tuesday. During the 86-60 win, Joiner scored 22 points and in doing so accomplished something no other Charger basketball player has ever done. While his career is not quite over at Oxford, Joiner has eclipsed the 1,000-point mark with 1,002 on the season and put his career scoring mark at 2,508. Both are Oxford High records.

“My teammates and the coaching staff, they just put a lot of trust in me to go out and do what I’ve been capable of doing,” Joiner said. “I knew it in the summer and just playing a lot of AAU ball, during practices. Seeing glimpses that I was on another level.”

Joiner’s game went beyond a whole other level. It was in another stratosphere.

For most of the season, he was the nation’s leading scorer but has since fallen to second, averaging 37.1 points per game. During a game in a tournament in Missouri, Joiner scored 58 points. It was only one of his impressive performances of the season. Before the season began, Joiner got his future figured out when he committed to play at California State University – Bakersfield and for former Ole Miss men’s basketball coach Rod Barnes. The release of the pressure from having to decide which college to go to helped Joiner play more free and with a clear head.

“It took a lot of pressure off my back,” Joiner said. “Just made the right decision going to play for California State Bakersfield”

Oxford coach Drew Tyler is in his 20th season as a head coach. There have been a lot of players come and go under his command, but Tyler does not think twice when considering who the best player he’s ever coached is. To him, there is no debate.

“Absolutely,” Tyler said when asked if Joiner is the best player he’s coached. “Most of his makes are contested shots. We’re not talking about a shooter who is an above-average shooter making wide-open shots. He’s been doing it against double teams, box and one, triangle and twos. We’ve seen all kind of trick defenses where they had tried guarding him in a game, and he’s still getting his numbers.”

More to come
The season is not over, which means there are more chances for Joiner to shine in a Charger uniform. Oxford claimed the regular-season region title with a 5-1 record, earning them a No. 1 seed in the region tournament next week. They will play No. 4 seed West Point at 5:30 p.m. on Tuesday. If they win, they will advance to the championship game at 7:30 p.m. on Friday. It will guarantee them at least one more home game in the first or second round of the MHSAA Class 5A playoffs, which begin on Feb. 21. If the Chargers win the tournament for the third straight year next week, they will have a bye into the second round.