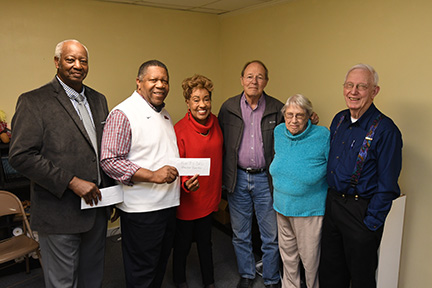 Several churches in Oxford and Lafayette County have raised more than $16,000 to assist the residents of Riverside Place find a new place to call home.

On Friday, representatives from the Tallahatchie-Oxford Missionary Baptist Association and Rivers Hill Church delivered checks worth about $3,200 to Interfaith Compassion Ministries, the organization that is collecting donations for the Riverside residents to be used for deposits.

The public housing complex, operated by the Oxford Housing Authority through the U.S. Department of Housing and Urban Development, sent out letters in February 2016, to roughly 90 tenants informing them the contract with the city of Oxford would not be extended. It runs out Feb. 28, 2017.

Riverside residents were asked to find a place they’d like to live, whether in Oxford, Lafayette County or another state. OHA will issue a voucher to landlords to pay the residents’ rent, as long as they continue to meet the financial requirements of OHA.

So far, about 31 families have secured a new place to live and the Oxford Housing Authority is working with about 40 landlords locally to find homes for the remaining families.

While the deadline is just a few weeks away, OHA’s Jeff McClure has said no one will be kicked out on the street on Feb. 28. OHA will continue to help the families find new homes, using the vouchers to pay their rent at Riverside until they move.

While the vouchers cover rent, apartments and utility companies generally require deposits. That’s where ICM and the churches that support it have stepped up to help.

Lee Robinson, moderator at TOMB, said the association represents 19 churches and they’re all trying to raise funds to help the residents.

“Hopefully, we can find enough property owners who are willing to take the vouchers,” he said. “We want to do what we can to help make it easier for the residents.”

Riverside Place Apartments were built in the late 1960s by a local church group. It closed in the late 1980s and sat vacant until the city purchased it and reopened the subsidized housing complex.

The apartments have no washer and dryer hookups or central air conditioning and are run down.

“I’ve been out there delivering mattresses and furniture to some of the families whose apartments were infested with roaches and bed bugs,” Wiley said. “We’re trying to make a positive effort to assist all of the residents.”

Alonzo Hillard, of Rivers Hill Church, said his church has worked with Riverside residents often over the years, providing children with transportation to Sunday School and providing clothing and other essentials.

“This is another way we can help them,” he said Friday.