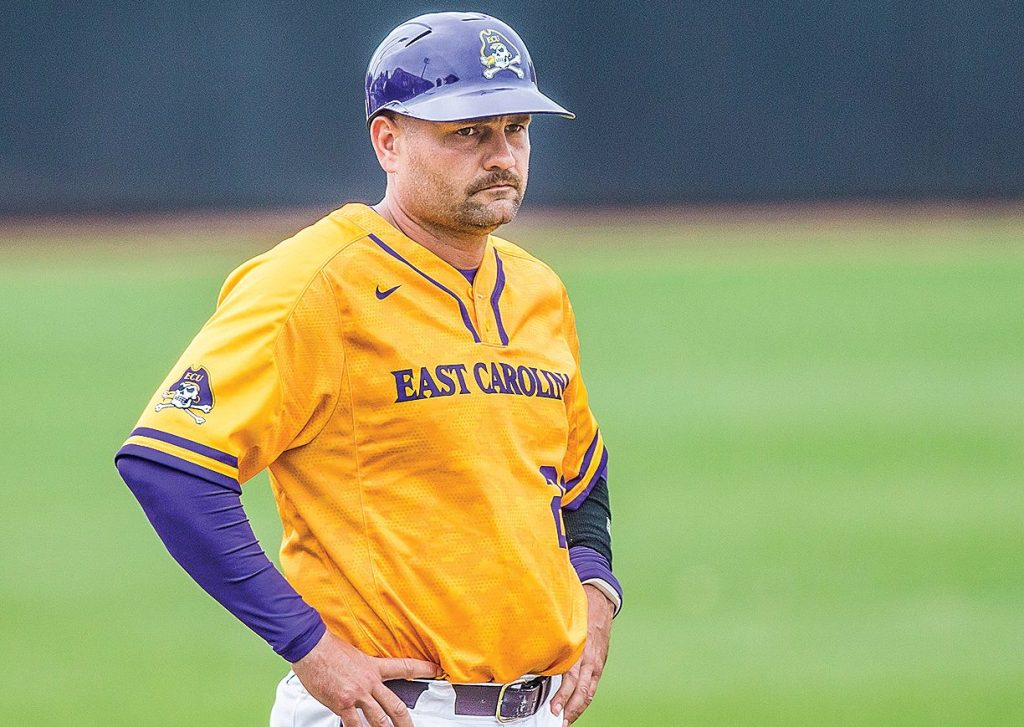 East Carolina coach Cliff Godwin will return to Oxford to coach against his former team this weekend when Ole Miss hosts the Pirates in the opening series for both teams starting Friday at Swayze Field. (ECU Athletics)

Cliff Godwin is eagerly anticipating his trip back to Oxford.

Godwin, a former assistant at Ole Miss, will be back in town this weekend when the 24th-ranked Rebels open the season against No. 10 East Carolina starting Friday at Swayze Field. Godwin is entering his third season as the head coach at East Carolina and is used to competing against quality teams having already led the Pirates to back-to-back NCAA regional appearances and a Super Regional berth, but not every part of the competition this weekend will be comfortable.

“It’s just going to be one of things now where I’m like, ‘Gah, we’ve got to go to Oxford,’” Godwin said. “(Ole Miss assistant Carl Lafferty) and Coach (Mike) Bianco and Coach (Mark) Mac(Millan) and all those guys, it’s like family. It’s never fun to have to compete against those guys, but it’ll be a good experience for our kids.”

Godwin was Ole Miss’ hitting coach for three seasons under Bianco, who called the hire a “no-brainer” in his search for a replacement for Matt Mossberg, who resigned after the 2011 season. Working his way through the coaching ranks with stops at UNC-Wilmington, Vanderbilt, Notre Dame, LSU and Central Florida as associate head coach, Godwin earned a reputation as one of the nation’s top assistants and an ace recruiter.

“He was obviously that name,” Bianco said. “He was the one that seemed like once you made the short list and he was on it, everybody you asked about that knew him had rave reviews.”

“I talked to him every day from my sophomore year until I signed,” Blackman said. “I was talking to him twice or once a week. He was getting me up to see a game and just keeping in contact on how the spring’s going and what not. … He was the one that got me here.”

Ole Miss went 123-71 with Godwin on staff and tied a single-season school record with 48 wins in 2014. That season saw the Rebels fight back from a one-game deficit in the Lafayette Super Regional against Louisiana-Lafayette and advance to the College World Series for the first time since 1972, easily the most gratifying moment for Godwin when reflecting on his time at Ole Miss.

“I’m just happy I was a part of Coach Bianco getting to the College World Series because he’d been close so many times and probably on paper had better teams than what we had in ’14,” Godwin said. “We won the regional at home, but to go on the road in a very hostile environment at Louisiana-Lafayette, lose Game 1 and then win the next two, just being a part of that is something that I’m really fond of.”

The Rebels’ success raised Godwin’s profile, but “there weren’t many head coaching jobs in the country I would’ve taken to leave Ole Miss and Oxford because I loved every second of it,” said Godwin, who’s the godfather to Lafferty’s oldest son.

But East Carolina wasn’t any ordinary job for one of its own.

The opportunity to coach his alma mater was one Godwin couldn’t pass up once ECU targeted him following the 2014 season. A four-year letterman as a catcher at ECU, Godwin helped the Pirates advance to the Super Regionals as the No. 6 national seed as a senior in 2001.

“The teams I played on pretty much raised the money for the nice stadium we have now,” Godwin said. “For me to be able to come back and carry on the tradition of East Carolina baseball as the head coach, really it’s a dream come true as far as being able to play here and coach here.” 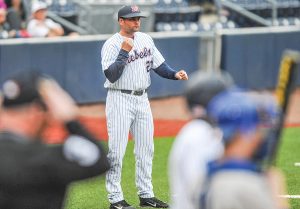 Godwin was Ole Miss’ hitting coach for three seasons before being hired by ECU in June 2014. (Bruce Newman)

Godwin took his hitting instruction and recruiting prowess with him but also a culture of toughness he said he first picked up on as a player under former ECU coach Keith LeClair that was reinforced at Ole Miss under Bianco. And despite taking over a program that missed the NCAA Tournament the two previous seasons, Godwin didn’t want to wait to win.

Godwin became the first coach in program history to win 40 games in his initial season when he led ECU to the American Athletic Conference tournament title in the Pirates’ first year in the league and a regional berth in 2015. ECU followed that up with an upset run through the Charlottesville Regional as the No. 3 seed and a Super Regional appearance last season, falling a win shy of its first-ever trip to the College World Series.

“He embraced a program that’s his alma mater, and I think he had a lot of pride in going back there,” Bianco said. “I assume — this is from the outside looking in — that the players probably felt that connection and his sincerity of we want to win and we want to win now. This is our program. I think a lot of coaches make that mistake when they take over a program of wait until I get my guys in, and you almost set yourself up to not be able to succeed immediately. I think Cliff welcomed the challenge and certainly there must’ve been a lot of challenges there. He’s a great coach.”

That’s not to say Bianco knew the Pirates would be this good this fast when Ole Miss and ECU scheduled the series in Oxford shortly after Godwin got the gig. Nearly three years later, the two will match wits in what’s become one of the nation’s more anticipated series of the opening weekend.

“Now they’re ranked in the top 10,” Bianco said with a grin.

ECU has four of its five top hitters back from last season to go against an Ole Miss rotation that has two holdovers in Friday night starter David Parkinson and James McArthur, who will throw Saturday. The Pirates’ strength lies in a pitching staff that has three of its top four arms back from a group that posted the third-lowest ERA in the AAC last season, including preseason All-American Evan Kruczynski (8-1, 2.01 ERA in 17 starts).

Godwin said he expects the talent on both sides to make for a “hard-fought series,” but there will be some time in between to catch up with some familiar faces. Bianco figures the two will get together for breakfast or lunch at some point this weekend.

“It definitely will be a little different for us, but it’s going to be fun,” Blackman said.

At least parts of it will be.

“Mike’s a competitor. I’m a competitor,” Godwin said. “But at the end of day, after the weekend and the dust settles, we’re both going to be pulling for each other to win a lot of games.”