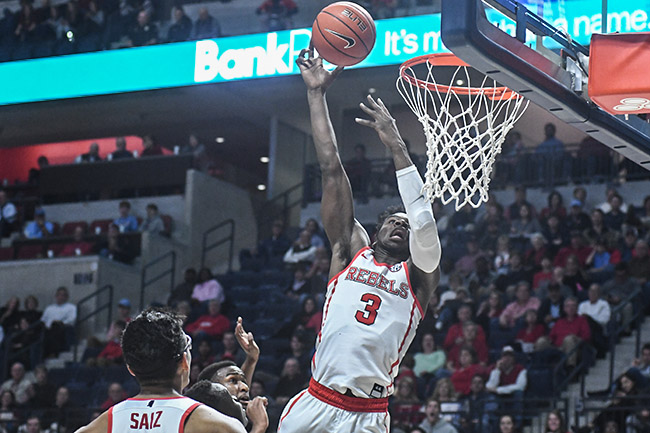 Ole Miss guard Terence Davis goes up for a dunk against LSU at The Pavilion at Ole Miss, in Oxford, Miss. on Tuesday, February 14, 2017. (Bruce Newman, Oxford Eagle via AP)

Ole Miss avoided a bad loss with a 96-76 win over LSU, a game that was much closer than the final score indicated. The win, the Rebels’ fourth in their last five games, pushed Ole Miss above .500 in SEC play for the first time this season and into sole possession of sixth place in the league standings with five regular-season games to go.

Here are three takeways from the win:

Ole Miss exerted a lot of energy coming back from a 23-point second-half deficit just three days earlier in a 90-84 win over Auburn, and it showed early against the last-place team in the SEC.

The Rebels struggled to keep up early with LSU leading scoring Antonio Blakeney, who had 22 points by halftime, and looked a step slow chasing the rest of the Tigers’ players around for the first 30 minutes. LSU, which had three other players score at least 10 points, started the second half on a 6-0 spurt to take its biggest lead at 55-44.

But Ole Miss flipped a switch again and took over behind another strong second half from Terence Davis, who’s combined to score 48 points after halftime in the last two games. Ole Miss played with better energy on the defensive end switching among its man, 2-3 and 1-3-1 defenses and began crowding Blakeney on the wing by moving the 1-3-1 closer to the basket.

Blakeney got off just five shots in the final 20 minutes, LSU made just seven of its last 25 shots as a team, and Ole Miss outscored the Tigers 42-12 after trailing by 10 with 11:27 remaining.

Ole Miss has trailed at the half in 13 games this season. The Rebels have won six of them.

Ole Miss can’t keep digging these kind of holes if it’s serious about making a late run at the NCAA Tournament bubble, particularly on the road against better teams the next two games, but credit the Rebels for keeping it from popping here of late.

It’s no surprise to see Davis putting up huge numbers. He’s been doing it on a consistent basis since becoming a starter two months ago.

Cullen Neal finished with 10 points on 3 of 7 shooting, posting back-to-back double-figure games for the first time since December. Rasheed Brooks made three of his five 3-pointers for nine points.

The group also protected the ball with the trio combining for 10 assists and four turnovers. Freshman Breein Tyree played 20 minutes of turnover-free ball with three assists as the Rebels finished with 21 assists on 33 made baskets. Ole Miss has turned it over 11 times or fewer in five of its last six games.

It’s more of what Ole Miss needs to help take some of the pressure off Sebastian Saiz.

On to the next one

LSU began the day with an RPI of 149 and lost its 12th straight game, so the win isn’t moving the needle for Ole Miss as it relates to the Rebels’ NCAA at-large chances.

Tuesday was simply about avoiding disaster. While the Rebels flirted with it, they ultimately got the result they had to have.

Ole Miss plays three of its final five games on the road starting Saturday with Arkansas, a top-50 RPI team. Ole Miss likely has to win that one as well as the regular-season finale at home against No. 21 South Carolina to beef up a resume that has just one top-50 RPI win while trying to avoid other potential landmines against Mississippi State and Missouri.

More opportunities could come in next month’s SEC Tournament, but a crucial stretch starts now.

Next up: Ole Miss’ game at Arkansas on Saturday is set for a 5 p.m. tip. It will be aired on the SEC Network.