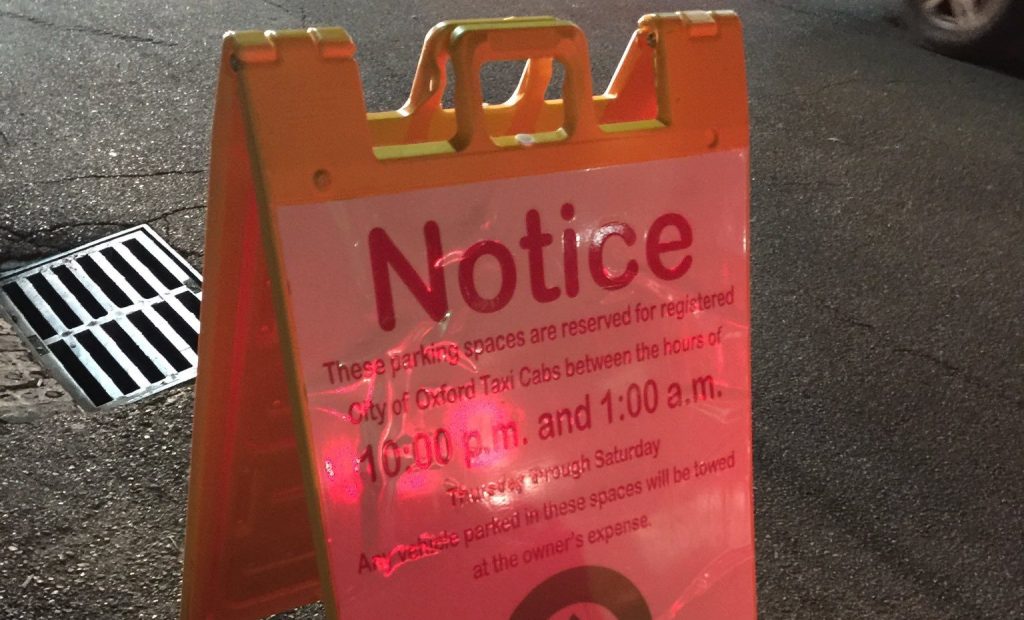 This sign is intended to alert Square patrons to avoid parking in spaces reserved for taxis after 10 p.m. Those who violate the rule could have their vehicles towed. (Photo: Alex McDaniel)

Being a busy mom who doesn’t get too many free evenings, my once-in-a-blue-moon trips downtown for dinner and a cocktail are few and far between. So when my sister and I ventured out one Saturday night, we were thrilled to find an open spot near Saint Leo, quickly nabbing it and dropping a few hours’ worth of money in the meter.

When we made our way back an hour or so later, our jaws dropped upon seeing a tow truck driver in front of my sister’s car preparing to haul it away. Knowing the meter couldn’t have expired, I asked the officers standing nearby what the problem was.

That’s when they pointed to a small folded plastic sign on the ground neither of us had noticed due to the fact it was dark and, well, there’s nothing particularly noticeable about it. Unbeknownst to us, we had parked in a spot reserved for city taxis to park after 10 p.m.

Don’t get me wrong: Reserved taxi spots are a much-needed courtesy for drivers and downtown patrons needing a ride home after a night on the Square, not to mention a good way to keep traffic moving given how little room there is for taxis to pull over to pick up customers. We just weren’t aware of it and apparently never saw the sign enforcing it.

Despite the fact the car hadn’t been moved, the only way to keep it from being moved was to pay $125 to the tow truck driver right then and there. I handed over the money, albeit begrudgingly. I even took a few photos to share with my Twitter followers who would likely agree with the ridiculousness of it all.

Parking and paying for a metered spot is fine unless you don’t see this two-foot sign and then it’s $125. #oxfordthings pic.twitter.com/TystSMbhJe

Truth be told, I would have felt better about the whole situation if any of that money went to the city in some way, perhaps toward funding the new parking garage, or you know—a sign that’s actually visible after sundown. But what bothered me more was the thought of my sister, a full-time student, being in that situation alone and not having the money to get out of it. There’s no telling how many times other students, visitors or residents might have dealt with the same thing since the change was enforced last year.

Rules are rules, even when you don’t mean to break them. But there’s got to be a better way of serving local taxi drivers and the people who need them than hoping everyone’s on the same page about a regulation spelled out on a flimsy yellow sign.