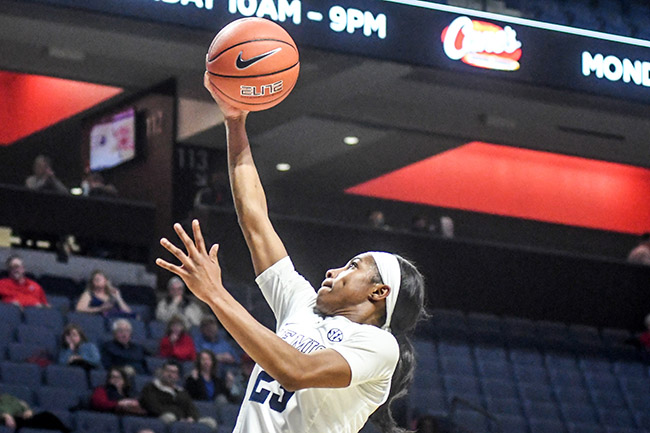 Shandricka Sessom was making a run at a career night.

Then Ole Miss’ women had to hold on without her.

Sessom had a game-high 26 points and grabbed eight rebounds, and Ole Miss held off a late surge by Auburn to salvage its three-game homestand with a 63-59 win Thursday at The Pavilion. Ole Miss coach Matt Insell wasn’t about to downplay the importance of the Rebels’ first home win since Jan. 29 and just their third victory overall in their last nine games.

“It puts us at 5-8 in the league. We know we’ve got to get to 8-8 if we’re going to have a chance to be in the NCAA Tournament,” Insell said. “That’s the mark in women’s basketball in this league. We put ourselves in a little bit of a hole, but we’re one down. We’ve got to figure out three more.

Sessom, who finished two points off her career-high, carried the Rebels (16-10, 5-8 Southeastern Conference) on a night when they shot just 41 percent from the floor, shooting 10 of 17 from the field and 6 of 10 from 3-point range. Her 3 from the corner late in the third quarter gave Ole Miss the lead for good at 39-37, and she sank another one on the Rebels’ next possession to give Ole Miss a two-possession lead in a game neither team led by more than nine.

But Sessom fouled out with 2:43 left, and Auburn cut an eight-point Ole Miss lead to two on Brandi Montgomery’s 3 with 10 seconds left. But Alissa Alston, who scored Ole Miss’ last six points from the charity stripe in the final 36 seconds, iced it with two free throws.

Ole Miss turned it over 20 times against Auburn’s full-court defense but forced 17 of its own to keep the Tigers’ offense from finding any kind of rhythm. The Rebels held Auburn to 33.8 percent shooting from the field and just 29.6 percent (8 of 27) from the 3-point line, avenging a 26-point loss in the teams’ first meeting Jan. 8.

“We didn’t play with an Ole Miss mentality there for a couple games,” Insell said. “I don’t care how many shots you miss, you’ve got to be after loose balls and you’ve got to go out there and guard people. We did that tonight.”

Ole Miss will try to keep its slim NCAA hopes alive at Vanderbilt on Sunday. Tip is set for 2 p.m.