Nominations for Sullivan Award for Community Service at Ole Miss 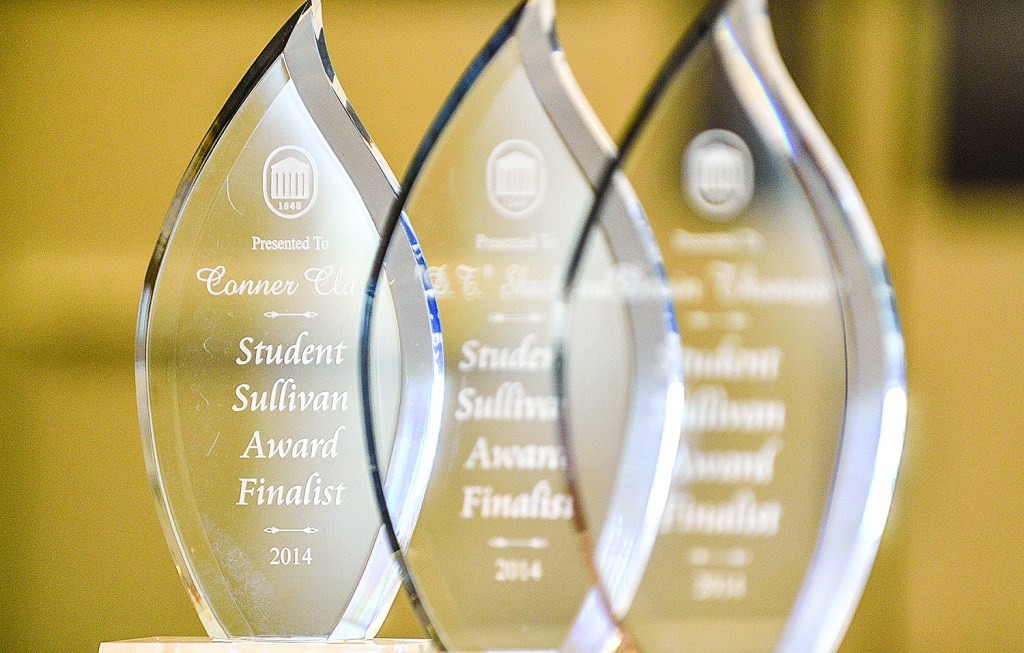 Algernon Sydney Sullivan Award nominations are due Feb. 24. Recipients of the community service award, which is given to one student, one alumnus and one member of the local community, will be announced April 5. Photo by Nathan Latil University Communications

The McLean Institute for Public Service and Community Engagement at the University of Mississippi is seeking nominations for The Algernon Sydney Sullivan Award.

The award recognizes those who exhibit “nobility of character, exemplified by selfless service to others and the community.” UM will accept nominations through Feb. 24 for one student, either undergraduate or graduate; one alumnus; and one member of the Lafayette-Oxford-University community.

To nominate someone, visit the McLean Institute’s website. Recipients will be announced at 3 p.m. April 5 in the ballroom at The Inn at Ole Miss.

Recognizing service is crucial to the mission of the McLean Institute, which supports transformation through service, said Albert Nylander, the institute’s director.

“This is UM’s fourth annual celebration of service recognition, and we’re proud to honor wonderful individuals who work tirelessly behind the scenes to make lives better for others,” Nylander said. “The Sullivan Award is an opportunity to honor a student, an alumnus and community member who have made our community a better place because of their humble service.”

Herod was double-majoring in broadcast journalism and African-American studies, served with the McLean Institute’s Horizons program, College Corps, Ole Miss Ambassadors and the Black Student Union, in addition to years of volunteer work.

Wortham is coordinator for the Adult Basic Literary Education program for the Lafayette County Literacy Council and a tutor and instructor who has helped more than 400 people get their GED, among other accomplishments.

Like honorees in years past, ideal candidates are selfless and committed to improving life for others, said Laura Martin, assistant director of the McLean Institute.

“The Sullivan Award honors individuals who place serve above self,” Martin said. “Sullivan Award recipients have distinguished themselves by embodying the qualities of honesty, morality, ethics, integrity, responsibility, determination, courage and compassion.”

The honor was established in 1890 to recognize those who emphasize service to others before oneself, while also having integrity and being honest, moral, ethical, responsible, determined, courageous and compassionate. Those who do not actively seek recognition are prime candidates.

The award has been given for 130 years and is awarded at 72 colleges and universities across the South, said Steve McDavid, president of the Algernon Sydney Sullivan Foundation.

“The Sullivan Award is the highest nonacademic honor at most schools where it is given,” McDavid said. “The award recognizes and honors those that humbly serve others in their day-to-day life.”