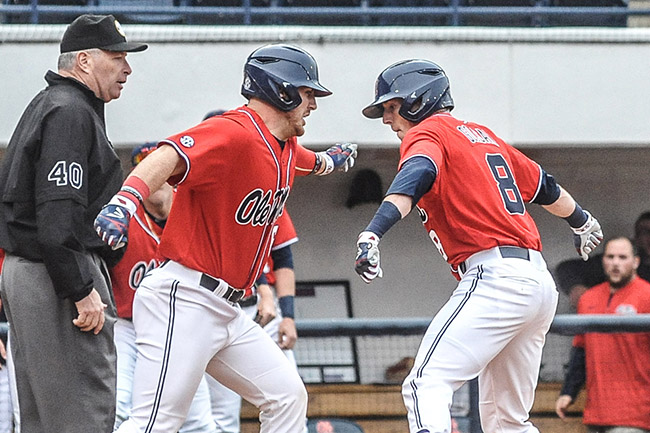 David Parkinson gave up a home run to the first batter he saw this season. A few innings later, East Carolina knocked Ole Miss’ southpaw around for a couple more runs.

Other than that, Parkinson was good.

Parkinson went seven innings, matching a career-high in the first Friday night start of his career, and No. 8 Ole Miss got just enough offense to start the season with a 5-4 win over No. 6 ECU on Friday in front of 12,117 fans, a Swayze Field record. ECU made things interesting in the ninth when Spencer Brickhouse hit a solo homer off Will Stokes, but Stokes got Luke Bolka to pop up to seal a six-out save against former Ole Miss assistant Cliff Godwin’s team.

“(ECU) makes it hard on you,” Ole Miss coach Mike Bianco said. “They’re terrific as you know a Cliff-Godwin team would be with two strikes. … They’re a terrific group. We’ve got our work cut out for us.”

Ole Miss got to ECU senior ace Evan Kruczynski (0-1), who posted a 2.01 earned run average in 17 starts a season ago, for four runs (three earned) on six hits in seven innings for a 4-3 lead. Designated hitter Chase Cockrell drove in his first run in an Ole Miss uniform with an RBI single in the home half of the eighth to give the Rebels (1-0) some necessary insurance.

Freshman Thomas Dillard also notched his first college RBI, going 1-for-2 with a go-ahead double in the bottom of the fourth. Will Golsan hit his fourth career homer for his only hit in three trips while sophomore center fielder Ryan Olenek finished 3-for-4 with a double, helping pick up the slack on a night when Tate Blackman and Colby Bortles combined to go 0-for-7 with four strikeouts.

“We know we can hit,” Olenek said. “We’ve got a lot of good hitters on this team. Not just kids that hit it hard, but they can hit any pitch.”

Moving to the front of the rotation with Brady Bramlett gone, Parkinson (1-0) settled in for his first win after allowing a leadoff homer to Dwanya Williams-Sutton, recording a career-high six strikeouts and surrendering just two more hits after the Pirates’ two-run fourth. Back-to-back doubles from Bolka and T.J. Riles put ECU (0-1) up 3-2, but Dillard threw Riles out trying to stretch his into a triple to end ECU’s half of the inning.

“I was missing pitches,” Parkinson said of his fourth inning. “I was missing a lot of 0-1 and 1-2 pitches that I should’ve made and left them up.”

Ole Miss took the lead for good in its next at-bat when Cockrell scored on a passed ball and Dillard doubled in Golsan. Parkinson retired six of the next seven batters he faced and got Turner Brown to line into an inning-ending double play in his final inning to preserve the one-run lead.

“When you (give up a leadoff home run), you don’t know,” Bianco said. “It’s the first time on Friday night, but he showed why he is the Friday night guy. He was able to make some pitches and get out of that. Right after that batter, he gets a couple strikeouts and runs off the field and really takes control of the game.”

Parkinson threw 96 pitches, 26 of those being first-pitch strikes to every batter he faced.

“Filling it up. Coach wanted me to go attack their hitters, and that’s what I did.”

The teams will play the second game of the series Saturday at 1:30 p.m.