Ole Miss looking for faster start with opportunity at Arkansas 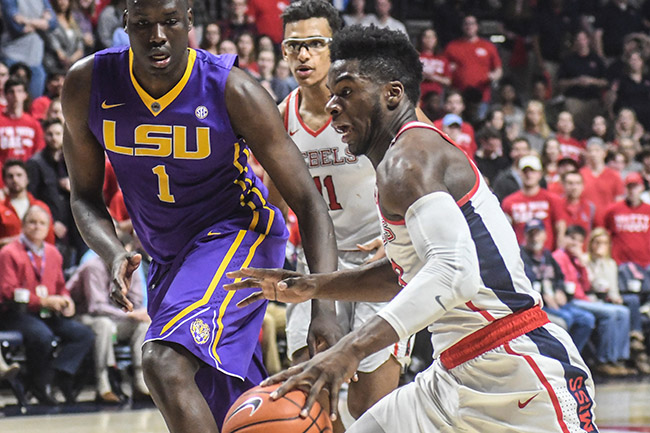 As bad as Ole Miss has been in the first half of its last two games, the Rebels have been equally as good in the second.

It’s resulted in back-to-back double-digit deficits turning into wins, including a historic rally against Auburn last Saturday, but the Rebels know they can’t keep digging such deep holes early if they’re serious about trying to make a late run at an NCAA at-large bid. Ole Miss (16-10, 7-6 Southeastern Conference) has five games left in the regular season starting with a trip to Arkansas on Saturday (5 p.m., SEC Network).

With four wins in their last five games, the Rebels sit at No. 66 in the NCAA’s latest RPI rankings. CBS Sports bracketologist Jerry Palm has Ole Miss as one of the first four teams out of the projected field of 68 while neither ESPN’s Joe Lunardi nor USA Today’s Shelby Mast have the Rebels that close to the bubble.

“We’ve got five more games in the regular season,” said guard Terence Davis, who’s averaging 19.3 points over the last nine games. “We’ve got to at least get four of the five and make some noise in the SEC Tournament. Coach always puts in our ear that we’re right there.”

Arkansas (19-7, 8-5) offers Ole Miss a chance at what would be just its second top-50 RPI win of the season, though the Rebels would be better off not trying to get it the way they’ve won the last two. After trailing Auburn by 23 points with 18 minutes left, Ole Miss offered little resistance early against SEC bottom-feeder LSU on Tuesday, allowing its best player, Antonio Blakeney, to frequently get open looks while struggling to keep the Tigers out of the lane in another example of letting the game “get free and easy,” Ole Miss coach Andy Kennedy said.

“We can’t play that way. That’s just not how we’re built,” added Kennedy, whose team has trailed at halftime in half its games this season. “We have to get dirty, we have to get grimy, and we have to try to come up with some stops.”

LSU pushed its three-point halftime lead to 11 early in the second half and still led by double digits with 11:27 left before the Rebels turned it on again. Ole Miss forced 12 turnovers after halftime to get going in transition and followed up a 63-point second half against Auburn with 52 points in the final 20 minutes against LSU in a 96-76 rout.

Ole Miss had the help of its home crowd to fuel both comebacks, an advantage it won’t have Saturday at Bud Walton Arena. The Rebels have had success there recently, winning five of their last six games at Arkansas.

Keeping that success going will likely require Ole Miss to keep up early with the Razorbacks, who are 12-3 in their building this season.

“They’ve got home-court advantage, and they feed off their crowd,” Davis said. “First half, it’s a must.”