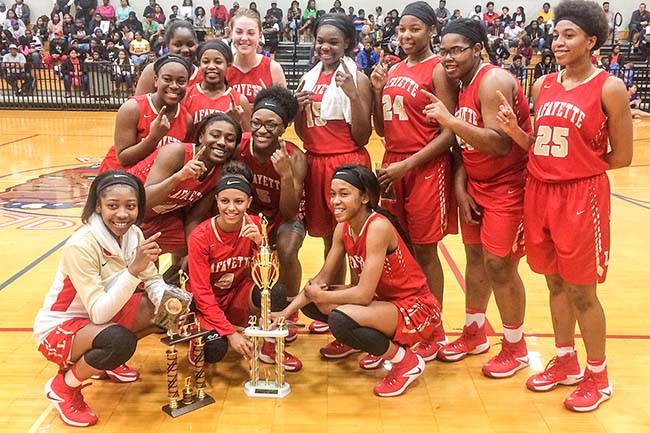 BYHALIA — The MHSAA 2-4A Region Tournament Title will stay with Lafayette for another year, as the Commodores girls’ basketball team defeated Byhalia in dominating fashion by a score of 70-39, earning the number one seed for next week’s playoffs. Lafayette will host Houston in Monday’s first round at 7 p.m.

The Commodores came out to a blisteringly hot start, opening the game with a 16-3 run and not missing a field goal attempt until there was less than four minutes left in the quarter. By halftime they lead 43-18, and midway through the third quarter they built a large enough lead to pull their starters.

“We were extremely aggressive but we did it under control,” head coach Shayne Linzy said. “We weren’t fouling and things of that nature, we were doing it the right way, very aggressive on the boards on both ends of the court, and we were able to get out in transition and finish and that was huge for us.”

The Commodores only region loss this season came against Byhalia in January, after their defense struggled in the first half before bouncing back in the second half, but ultimately the lead was too much to overcome. Tonight, Linzy said his defense played lights out.

“I told them if we’ll play defense like we did the second half, we’re going to have a chance to win, and I thought we did that but also were a lot more aggressive attacking the boards on both ends, and I think that was the big difference today,” Linzy said.

Offensively, the Commodores took advantage of their ball handling skills with a variety of players leading the fast break and pushing the ball to open up quality looks in transition. They spread the ball well, with sophomores Mariah Holland and Xhiir Burgess both scoring 12 points, and senior Shaniyah Buford scoring 14, highlighted by a run where she recorded an emphatic block and a steal and scored the ensuing basket in transition after each.

Linzy said it was huge for the team to beat Byhalia and repeat as the 2-4A Region Tournament champions.

“To do what we did tonight, could not be prouder of every single girl,” Linzy said.

Boys earn 4 seed
Lafayette fell to Senatobia 53-33 on Friday, making them the 4th seed in the MHSAA class 4A playoffs. The Commodores will travel to Leake Central on Tuesday at 7 p.m.

Through one quarter, the game was close with the Commodores only down 13-11. In the second quarter, Lafayette held the Warriors to just five points was able to take the lead, with junior Hogan Linzy scoring an and-one basket late in the half to give the Commodores a 22-18 advantage.

The second half was a different story, as the Warriors were able to completely shut down the Commodores offense. A quick trio of threes got the Warriors offense heated up, and with less than three minutes left in the game, Lafayette had only scored 6 points in the second half and Senatobia had stormed out to a huge lead.

While head coach John Sherman liked what he saw from the Commodores in the first half, he felt the shot selection by his team declined and that began to have a big effect on the team.
“When you don’t score you get frustrated and other parts of your game start to suffer and that’s what happened,” Sherman said.

Linzy recorded a double-double in the loss with 11 points, 10 rebounds and couple of timely bocks down low. Meanwhile, nine of Sophomore Stephon Isom’s 11 points came from behind the arc, and he added a few rebounds and a block to his stat sheet as well.