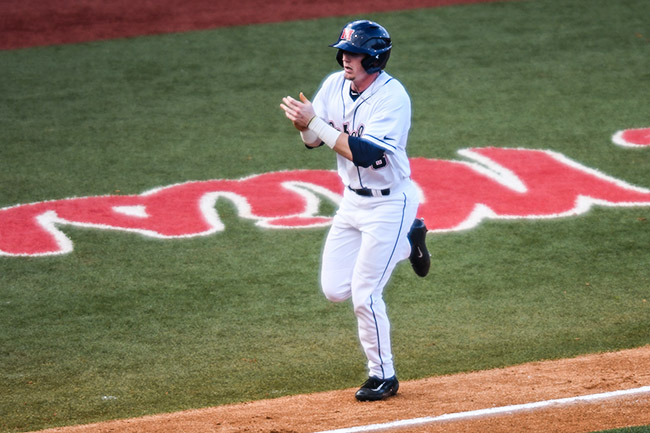 Ole Miss’ offense was nothing if not timely Saturday.

The Rebels put up a pair of runs in the seventh and the bullpen took care of the rest, helping No. 24 Ole Miss rally past No. 10 East Carolina, 3-2, at Swayze Field to clinch a season-opening series win against former Ole Miss assistant Cliff Godwin’s team.

Ole Miss (2-0) trailed 2-0 in the sixth and was just 2 of 19 with runners on base, but Colby Bortles cut into the deficit with a solo home run in the bottom of the frame. Will Golsan doubled home Ryan Olenek to tie it in the seventh and came home on Bortles’ sacrifice fly to give the Rebels a lead they wouldn’t relinquish.

“The truth is we were just a hit away,” Ole Miss coach Mike Bianco said. “We had some hits, we had some baserunners, but we just couldn’t get the key hit today to kind of get some runs across. It seemed like with two outs, we’d hit a lazy fly ball and were just missing that big extra-base hit to kind of capitalize.”

Olenek and Golsan, the top two hitters in the lineup, each finished with two hits for the Rebels, who had five of their nine knocks over their final three at-bats. Freshman Thomas Dillard went 2-for-3 with a double.

ECU starter Jacob Wolfe baffled the Rebels, working around three walks and four hits while striking out six, but 82 pitches ended his day after five innings. Bortles took Sam Lanier (0-1) deep for his first hit of the season to start the sixth, and Lanier was charged with all three runs after not recording an out in the seventh.

“(Wolfe) was really good mixing up pitches, like the soft-tossing lefty kind of guy,” Bortles said. “He wasn’t overpowering, but he had a really good changeup and we were off balance the whole game. But we stuck to our approach and finally got him out of there so we could have somebody else.

“I felt like the energy in the dugout was a little different (after the home run).”

Ole Miss’ James McArthur gave up a solo homer to Luke Bolka in the second but yielded just two more hits and struck out three before running into trouble in the fifth. The sophomore right-hander walked one, allowed a single and hit two batters, the second one forcing home Bolka to give ECU (0-2) a two-run cushion.

But Andy Pagnozzi came on and induced an inning-ending double play to prevent further damage — even if it didn’t happen exactly how the Rebels would’ve liked. Bianco said he called for a fastball, but mixed signals resulted in Pagnozzi throwing a curveball to Eric Tyler, who rolled one over to shortstop Grae Kessinger to start a 6-4-3 twin killing.

“I’m glad Andy was right,” Bianco said with a grin.

“That’s the big play of the day where you come in with the bases loaded, one out, and you get a double-play ball to get us out of the inning because at that point, you’re feeling pretty bad like you missed some opportunities,” Bianco added. “You’re a single away from them busting the game open. That was huge.”

Pagnozzi (1-0) picked up the win, combining with Dallas Woolfolk and Will Stokes, who notched his second save in as many days, to yield just two hits and fan six in 4 2/3 scoreless innings of relief.

Ole Miss will go for the sweep Sunday at noon.