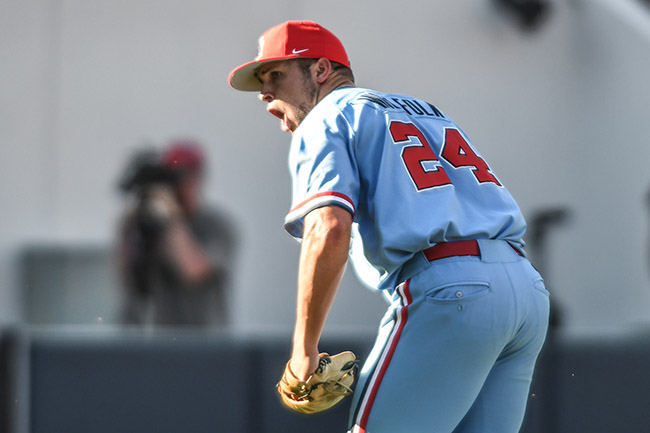 Ole Miss pitcher Dallas Woolfolk (24) reacts after striking out the side with the bases loaded in the 8th inning against East Carolina at Oxford-University Stadium on Sunday, February 19, 2017. Ole Miss won 8-6. (Bruce Newman, Oxford Eagle via AP)

Woolfolk came on for Greer Holston with the bases loaded and nobody out in the top of the eighth after an error, a hit and walk turned the lineup over for ECU. After fanning leadoff man Dwanya Williams-Sutton, the Pirates’ top hitter a season ago, and T.J. Riles with his mid-90s fastball, Woolfolk used heat to get two strikes on Eric Tyler before getting Tyler swinging on a biting slider to preserve the Rebels’ two-run lead.

“I started working on it really hard after (fellow Ole Miss pitcher) Sean John(son) showed me a grip, and I’ve been messing with it ever since,” Woolfolk said of his slider. “Once I went to summer ball, I actually started there and just worked on it every day trying to make it the best pitch I can. … The fastball was there, the slider was there. Just felt good.”

Woolfolk, making his second appearance in as many days, struck out two more batters in a clean ninth to pick up the save, sealing No. 24 Ole Miss’ 8-6 win and a sweep of No. 10 ECU on the opening weekend at Swayze Field.

“I don’t know if I’ve ever seen a more dominant performance. I don’t know if there can be,” Ole Miss coach Mike Bianco said. “With the situation and talented team that he’s facing, to strike out five out of six right there in the middle of their lineup, it was terrific.”

Woolfolk was one of 12 pitchers used in a game that turned into a bullpen battle with neither starter pitching past the sixth inning. Ole Miss (3-0) trailed 6-2 heading to the bottom of the sixth but put up a five-spot in its next at-bat and added an insurance run on a wild pitch in the seventh.

Ryan Olenek’s two-run double in the sixth, his sixth hit of the weekend, put Ole Miss ahead for good. Freshman Cole Zabowski erased ECU’s early 2-0 lead with a two-run home run in the second and finished 2-for-4 with four RBIs while Will Golsan drove in a run.

Freshman Ryan Rolison (1-0) picked up the win as the first on in relief of Brady Fiegl, who retired nine of 10 batters at one point after giving up three hits in the first, including Travis Watkins’ two-run single, but didn’t get an out in the sixth.

Three straight hits, the latter an RBI double from Watkins to put ECU (0-3) back up 3-2, ended the first career start for Feigl, who made 26 appearances in relief a season ago. The sophomore right-hander surrendered five runs (four earned) on nine hits while striking out three.

“It looked like he was kind of in control there, and all of a sudden, they had some good at-bats in the sixth to get him out,” Bianco said. “He was just not able to get out of the inning unscathed, but I thought he pitched pretty well today.”

Rolison, in his first appearance of the season, got Travis Edwards looking for the first out in the sixth, but Charlie Yorgen chopped one over Zabowski at first two batters later for a two-run single. The Pirates got their fourth run of the inning when Rolison slipped fielding Nick Barber’s bunt, allowing Luke Bolka to score.

The Rebels went to work against the Pirates’ bullpen to quickly respond. Golsan singled home Colby Bortles, Zabowski followed with a two-run single, and a walk and a fielder’s choice turned the lineup over for Olenek, who lined Chris Holba’s first offering to right-center to put the Rebels back on top, 7-6.

“Once we got going, we knew we had some clutch guys and some guys that could come through,” Zabowski said. “It didn’t matter the circumstance.”

ECU closer Joe Ingle came on for freshman starter Trey Benton with two outs in the bottom of the second and held the Rebels to just one hit over the next 3 1/3 innings, but Ole Miss plated six runs against the Pirates’ next three relievers to rally for its first home sweep of a top-10 team since 2010.

“It’s one weekend with 13 left to go in the regular season, but I’m proud of the way we handled a lot of things,” Bianco said. “We made some mistakes and certainly there are things we need to correct, but for the most part against a really, really good East Carolina team, I thought our guys handled the pressure well.”

Ole Miss will stay home Tuesday to take on Arkansas State at 4 p.m.

Watch Woolfolk and Bianco talk about the win in the videos below.