Yellowstone National Park in winter is a dream come true

During the five days we were there I kept thinking how fortunate I was to be there. It was a particularly cold and snowy winter this year with temperatures well below freezing so I was very happy. However, it is not the place for everyone.

I met an older woman from Florida who was just dreading the experience. Her husband wanted to go to Yellowstone for his birthday present and she reluctantly agreed. She told me that she had bought all the warm clothing she could find on the Internet, but she was still so fearful of feeling cold. I reassured her she would be fine with her many layers on. The day she was supposed to have an all day outdoor adventure in the park, she suddenly came down with a mysterious illness and had to spend the entire day in bed. Her husband had to go on the adventure by himself, and he had a great time. 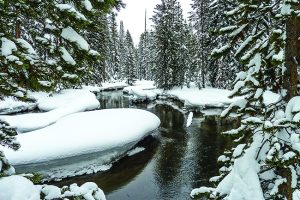 Firehole River where the snow was pristine and untouched except for the tracks of animals that had wandered across the surface.

On her departure day she was back to good health once again, and ecstatic to leave and get back to her warm home.

To get to Yellowstone we flew into Bozeman, Montana, and then rode a shuttle bus from the airport into the park. Yellowstone is closed to car traffic in the winter months and only snow coaches and some snowmobiles are allowed on the roads. The only entrance that is open is the north entrance near Gardiner, Montana, and cars are able to drive only as far as Mammoth Hot Springs.

There are some excellent tours that take place through the winter months, and they include a qualified park guide, snow coach travel, hotel rooms and most meals. We chose that option. Details can be found at www.YellowstoneAssociation.org. Once on the page you will see programs (bottom left) both for summer and winter. It is a bonus to have a park guide with you, as they are able to tell about the wildlife, history, ecology, and geology of the park. They also look after you, carry first aid, and know what to do in an emergency. If you do not want to go on a tour, it is possible to book excursions independently as well.

Our tour was called Winter in Wonderland, and the name really described the experience we had.  The tour included snowshoeing and cross country skiing in various parts of the park. Upon arrival in Mammoth we rode in a snow coach to Old Faithful. The snow coaches are comfortable mini buses that seat twelve, but they have unusual tires. Some of the snow coaches have huge tires that run at 8psi, and others have triangular wheels called mattracks for maximum grip on snowy roads. We were able to ride in both types, as the trips to the interior of the park required the triangular type wheels. The snow coaches have a maximum speed limit of 20 mph and they get 2 to 3 mpg.

We stayed at the Old Faithful Snow Lodge, which was built about fifteen years ago and is one of the newer lodges in the park. It is at an elevation of 7,300 feet so takes a day or two to get used to the altitude. The Lodge is a modern, beautiful building with everything a traveler needs to be comfortable: nice bathrooms, clean and airy bedrooms highlighted with natural wood, and an excellent restaurant.

There are no TV’s in the room and Internet is available at $5 an hour, so we did a lot of reading in the evenings. I read a fascinating book called “Death in Yellowstone,” which was about all the many ways people have died in Yellowstone. There was something almost morbidly fascinating about reading the book. Surprisingly not that many people are killed by bears or bison. The majority of people have been killed because one way or another they have fallen into the hot pools, which can be 180 degrees, and many are also highly acidic. If you fall in you basically do not stand a chance.

The hottest of the pools are a bright alluring blue, almost inviting you to dip a toe in. The problem is that the ground around the pools is very fragile so even if you think you are on firm ground, it is deceptive and people have fallen right through that thin crust and into the thermal pools.

The moral of the story is to stay on the boardwalks or designated paths, and you will be perfectly safe.

Yellowstone has over 10,000 thermal features all over the park. Located right behind the Snow Lodge is the old faithful geyser basin featuring Old Faithful, the dependable geyser that erupts every 90 minutes or so.

There are boardwalks that take visitors around the various hot pools and it was amazing to see steam coming from the thermal areas even though the temperature was below zero. We also saw mud pots, which bubble up molten clay and make a plop, plop, plop sound.

Animals stay closer to the roads in winter as it is easier for them to travel on the packed surface so we saw a lot of wildlife. We saw herds of bison on the roads, by the thermal features and on the banks of the river. We saw a lone white wolf, coyotes, white swans, otters and beavers.

One of the most spectacular parts of the park that we went to was The Grand Canyon of the Yellowstone. We actually cross-country skied along part of the rim of the canyon and the views were spectacular.

We also cross-country skied along the banks of the Firehole River, and the snow was pristine and untouched except for the tracks of animals that had wandered across the surface.

I loved every minute of being in the park, but one extra bonus was that the restaurant served chocolate molten lava cakes on their dessert menu.

They were totally decadent and so delicious. They also had huckleberry ice cream, which was pretty good too. I sure went to bed with a smile on my face each night, and was sad to leave Yellowstone, the freezing temperatures, and all the deep snow.

Joanne Wilkinson is a retired teacher and Oxford resident. You can reach her at jwilkinson1487@gmail.com.