Hundreds gather to meet their Muslim neighbors in Oxford 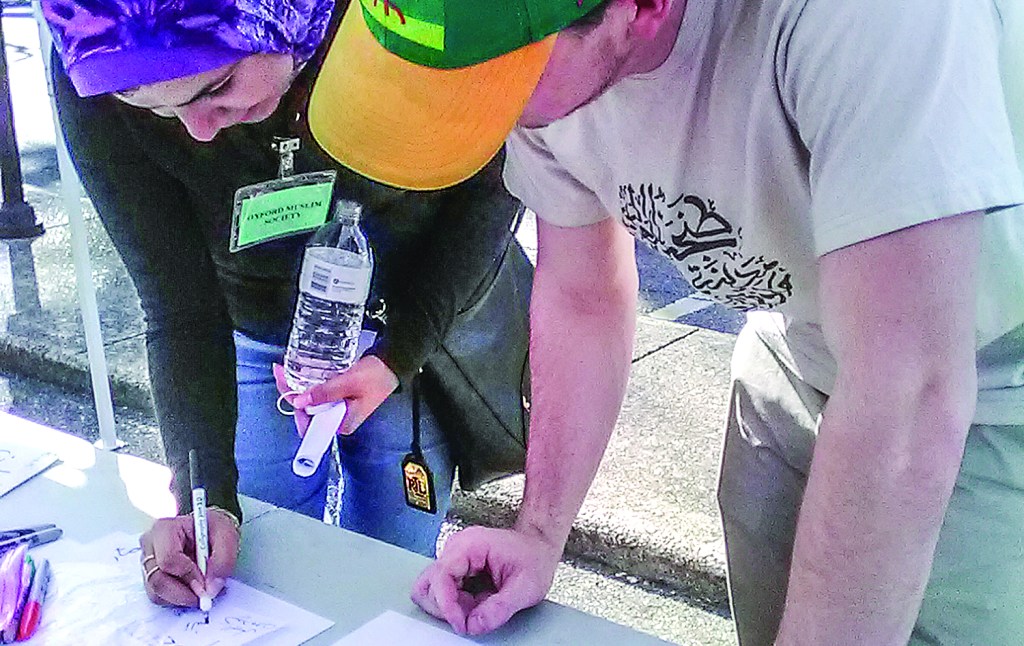 Nat Williams, an Ole Miss student majoring in Arabic, right, and a member of the Oxford Muslim Society, left, transcribed peoples’ names to Arabic during the Sunday Meet Your Neighbor Event that was held on the Square.

When she came back to live in the states to attend graduate school at the University of Mississippi, her parents told her it was okay for her to not wear her niqab, the Muslim garment that covers her entire head other than her eyes.

“I told them, I believe in what I wear and why I wear it,” she said Sunday to a group of people during the Meet Your Neighbor event on the Square. “Why would I change who I am? Why would I take it off? It is a matter of choice for me.”

Omary joined several other local Muslim women who simply stood under a tent in front of City Hall with a banner that read, “Life as a Muslim Woman,” and spoke to hundreds of people, answering questions about their lives in Oxford, their religion and their experiences being a Muslim woman in the United States, and more specifically, Oxford.

Mona Haron said she hasn’t experienced much racism in Oxford but has heard people use the term “cult” when referring to Islam.

“That word really hurts me,” she said. “We are just normal people who worship another religion.”

The event was hosted by the Change Mississippi organization in response to President Donald Trump’s attempted executive order banning immigrants from seven Muslim nations. The Oxford Muslim Society and the Ole Miss Muslim Student Association helped organize the event, setting up tents on the east side of the Square, where members of the societies spoke on Muslim history, current events and offered to write peoples’ names in Arabic.

Nate Williams, a junior at Ole Miss, isn’t Muslim; however, he has studied the language for several years and says he’s about 80 percent fluent. He spent most of Sunday afternoon transcribing names or other words for hordes of people.

“I am enjoying the experience and helping to build the community’s knowledge, giving them a hands-on experience,” he said. “There’s often a negative connotation associated with Arabic script. We’re helping to break barriers.”

Speakers at the event included Rep. Jay Hughes, Khalid Hudson with the International Museum of Muslim Cultures, and Mahmoud ElSohly, pharmacy professor at Ole Miss and president of the Oxford Muslim Society, who has lived in Oxford for more than 40 years.

ElSohly invited the crowd to visit the Oxford Mosque on McElroy Drive.

“We really want you to talk to us, learn about us. Ask us questions and find out about us,” he said. “Of course, we have some bad apples in our religion and our community who make it very difficult for the rest of us. Islam doesn’t teach us to hate each other, doesn’t teach us how to kill others — it teaches us to be peaceful and loving of each other.”