Lafayette girls defeat Houston, advance to second round of 4A playoffs 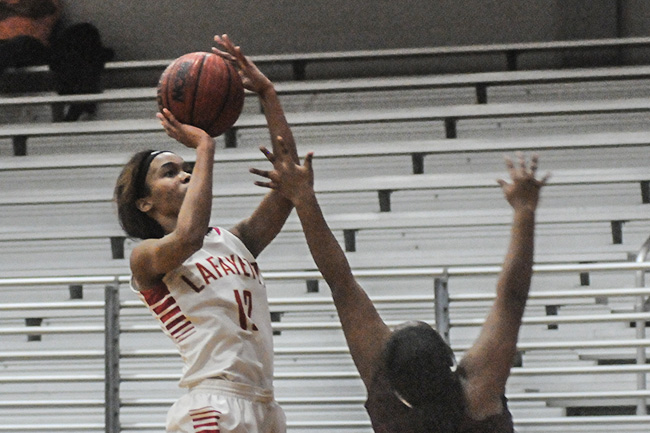 Lafayette’s Orianna Shaw (12), shoots over Houston’s Jaleah Jones (1) during Monday’s First Round of the MHSAA Class 4A state playoffs at the LHS gym. The Commodores won 52-26 to advance. (Jake Thompson)

After dominating Byhalia in last Friday’s Region 2-4A tournament championship, the Lafayette girls basketball team found themselves as the No. 1 seed heading into this week’s Class 4A state playoffs. The Commodores learned in Tuesday’s 52-26 win over No. 4-seeded Houston, nothing comes easy even when you are No. 1.

It was not the dismantling performance by Lafayette that had been seen just three days earlier as the Commodores struggled early with the Lady Hilltoppers, leading by only four points after the first quarter. Houston had Lafayette flustered early.

“We didn’t play with a sense of urgency,” Lafayette head coach Shayne Linzy said. “I still feel good about it. I still like how we can play. But, tonight we just didn’t play with the urgency that we needed to. We put ourselves in some bad situations.”

The energy did not show up in the second quarter either as the Commodores managed only nine points to Houston’s five for a 21-13 lead at halftime. Coming out of the break, Lafayette managed to resemble the team that was capable of putting up 70 points a night, matching their entire first half point total in the third quarter. The 21-point quarter was capped by a near half-court shot by Shaniyah Buford that beat the buzzer as time expired.

“A lot of credit needs to be given to Houston,” Linzy said. “I told the girls, ‘We have a huge target on our back. We’re the 1 seed, they’re the 4 seed. We’ve beaten them twice this year already. They have nothing to lose.’ That’s exactly how Houston played tonight. …I think we picked up the energy a little bit (in the third quarter). We were able to make some plays at the of the third quarter than they were.”

The Commodores return to action on Friday when they host Itawamba Agriculture High School in the second round at 7 p.m.

Linzy may be without a key piece to his starting line up on Friday and potentially further into the postseason as point guard Azariah Buford injured her knee in the fourth quarter and had to be helped off the court after colliding with a Houston player. Buford is considered day-to-day after preliminary evaluations.

“That’s my point guard,” Linzy said. “Without (Buford) we have to make some changes. I think we’ll be fine. Obviously, If we don’t have her it changes some things up. She’s an offensive threat, a defensive player and handles the ball. We’ll adjust and move on because that’s what we have to do.”