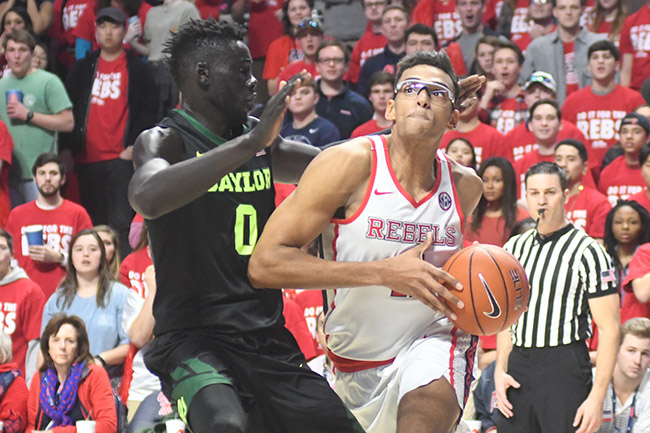 Sebastian Saiz hasn’t been his usual double-double self of late, though Ole Miss coach Andy Kennedy said it hasn’t been for a lack of trying.

Saiz is still the only player in the Southeastern Conference averaging double-digit points and rebounds, but the Rebels’ senior forward hasn’t recorded one in three games as Ole Miss’ NCAA chances have fallen on life support. Ole Miss (16-11, 7-7 SEC), which is just 2-9 against top-50 RPI teams after missing out on another opportunity at Arkansas over the weekend, likely needs to win out starting Tuesday at Mississippi State (8 p.m., ESPN2) and make a deep run in next month’s SEC Tournament to have any chance at an at-large berth.

Getting Saiz going again would help.

“We’ll continue to try to put him in a position where he can do the things he was doing earlier in the season,” Kennedy said. “Then ultimately as a senior and as the only four-year guy in our program, he’s got to get back to the way he was playing earlier and he’s got to produce at a level that garners all-league consideration.”

Kennedy said before the season double-doubles were the expectation for Saiz, and they’ve mostly been the norm despite the constant double teams Saiz draws inside. Saiz is second on the team in scoring (15 points per game) and still leads the SEC in rebounding (11 per game) thanks to a stretch where he posted 13 double-doubles in 15 games, but he hasn’t grabbed more than eight boards in any of the last three games and finished Saturday’s 18-point loss to Arkansas with just five rebounds and eight points, his lowest scoring output since scoring eight against Middle Tennessee State on Nov. 30.

Giving up 98 points to the Razorbacks was Ole Miss’ biggest problem, but Saiz went cold at an inopportune time with Deandre Burnett heating up and Terence Davis continuing to score in bunches. Burnett, who’s made 13 of his last 20 shots and eight of his last 12 3-pointers, and Davis combined to score 51 points against Arkansas, but the rest of the Rebels’ starters combined for 17 with Saiz shooting just 2 of 13 from the field.

Saiz is shooting 31.8 percent (14 of 44) over the last four games, dropping his field-goal percentage for the season to 46.9. With Saiz usually producing against the extra defensive attention he gets, it’s hard for Kennedy to nail down a specific reason for Saiz’s recent struggles.

“Obviously teams are game planning to stop him, but that’s not something that’s just happened in the last few games,” Kennedy said. “He’s just struggled with some production issues.”

Kennedy doesn’t expect Saiz’s production to be down for long, particularly with the extra practice Saiz is putting it. Saiz had 17 points and 11 boards against Mississippi State (14-12, 5-9) the first time — a 27-point Ole Miss victory on Jan. 31.

“He’s working,” Kennedy said. “Although he’s disappointed in his own play that he has not played up to his standard, he’s a guy that continues to work and continues to put in the work. As a result, we’re very confident that he’ll play his way through this stretch.”