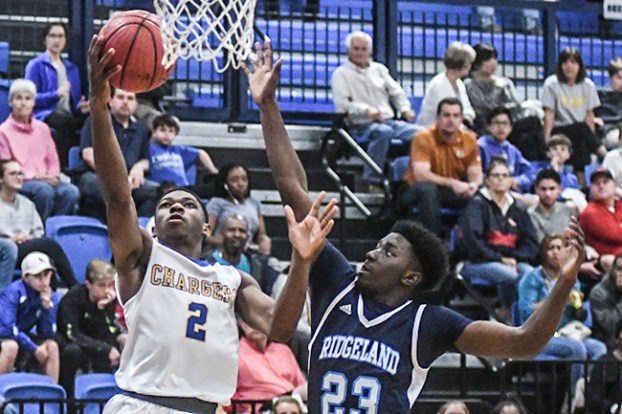 The Oxford High boys basketball team nearly scored 80 points in their MHSAA Class 5A playoff opener and needed only four players to do so. The Chargers defeated Ridgeland 76-59 on Tuesday night inside the OHS gym to reach Saturday’s second round.

“Numerous times, it’s been like that this year,” Oxford head coach Drew Tyler said of low number of scorers. “I like that we got a double-digit lead and we pretty much kept it the entire way.”

The game had all the makings of a track meet with scoring coming in bunches the first quarter. Oxford (23-7) took a 19-16 lead after the first eight minutes of play. The hot start continued for the Chargers as they scored 20 more points in the second for a 40-29 lead at the break.

“(Ridgeland) made shots,” Tyler said of the fast start to the game. “It was fast-paced. It was probably the most points Ridgeland scored in a half all year. Ridgeland keeps it low-scoring. They play a lot of horizontal basketball. Spread you out. The first period shocked me.”

The second half was more Oxford’s pace as they were able to control tempo and keep a 10-15 point lead the rest of the way.

Along with Bianco adding to the scoring duo of Joiner and Williams, he also finished with seven rebounds, coming just two behind Hiram Wadlington, who pulled down a team-best nine boards. The toughness of Bianco has been a welcomed addition down low for the Chargers this season.

“(Bianco) values the importance of a rebound,” Tyler said. “That’s kind of his shine time. A lot of the times, the crowd or the average person doesn’t see how important the rebounds are. … Then you bring that toughness because he’s such a team player. He knows where the ball is supposed to be.”

Ridgeland (16-13) was led by Darius Kent’s 24 points. Kent was the only Titan to score in double figures.

It will be nearly a year to the day that Oxford will have faced their second-round opponent in Canton. The Chargers defeated the Tigers 73-69 in their gym on Feb. 27 of last year. Fast forward to this Saturday when Oxford must travel to Canton  (7 p.m.) in hopes of recreating the same second-round success as last season.

“Our whole season’s been on the road,” Tyler said. “It won’t be anything new, being in someone else’s gym. But we’re looking for the same feeling in their locker room, in their gym, that we had here 365 days ago come Saturday.”