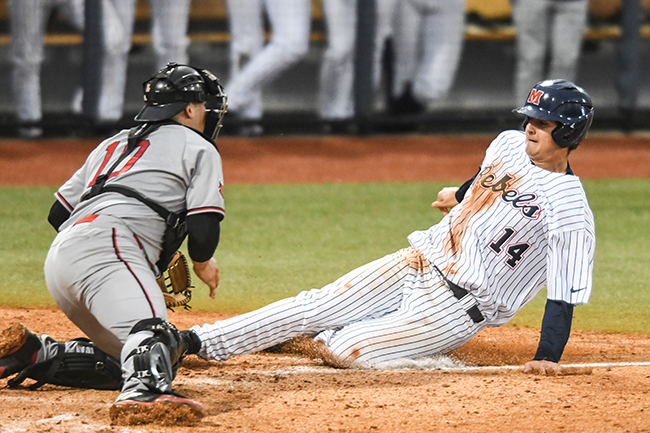 Will Ethridge struck out 10 and allowed just two hits over five innings to win his Ole Miss debut, and the Rebels cruised to a 16-4 victory at Swayze Field. Ethridge and fellow freshmen Houston Roth, Ryan Rolison and Greer Holston combined to punch out 19 batters while the Rebels’ offense gave them plenty of support.

“Coach (Mike) B(ianco) told us yesterday to go out there and pitch how we pitched during the fall and during the spring,” Ethridge said. “We worked hard for it, and I just wanted to come out on my terms there.”

Will Golsan had a career-high four hits — three of them doubles — drove in two runs and scored three times. Thomas Dillard went 3-for-4 while Colby Bortles had three RBIs. Chase Cockrell, Tate Blackman and Nick Fortes had two RBIs apiece.

“Just trying to get the barrel on the ball,” said Golsan, who raised his average to .533. “Just having quality at-bats like that.”

Ethridge (1-0), another highly touted member of the Rebels’ top-ranked recruiting class, retired the first three batters he faced and struck out five straight before Winston Welch reached on Grae Kessinger’s error in the second. Ethridge hit Jake Bakamus before Joe Schrimpf brought both home with a double.

Ethridge fanned two more in a clean fourth before Casey Vaughan homered off the right-hander to start the fifth. Grant Hawkins walked and came around to score on a wild pitch, but Ethridge got Schrimpf to ground into a 6-4-3 double play on the final pitch of his debut to minimize the damage. His 10 strikeouts are the most for an Ole Miss freshman since Justin Cryer also fanned 10 in 5 2/3 innings of relief against South Carolina in 2007.

“You guys can see he’s got really good stuff,” assistant coach Mike Clement said. “His stuff is what it is, and he’s going to be a really good pitcher for us. It was good for him to go get his feet wet, go throw and get a win and then face some adversity there in the fifth inning. He was able to bear down and get out of it.”

Roth, the former Oxford High standout, came on for Ethridge and struck out five in two innings of scoreless relief in his first college outing. Rolison struck out two of the four batters he faced in the eighth while Holston punched out two in the ninth.

“Like I said during the fall and the spring, they’re all the guys that we had to face and they were tough competitors up there,” Golsan said of the freshmen pitchers. “They transitioned well, and they’ve played well so far.”

Ole Miss’ eight-game homestand will continue Friday with the series opener against UNC-Wilmington at 4 p.m.