Ole Miss moves up in academic and research polls 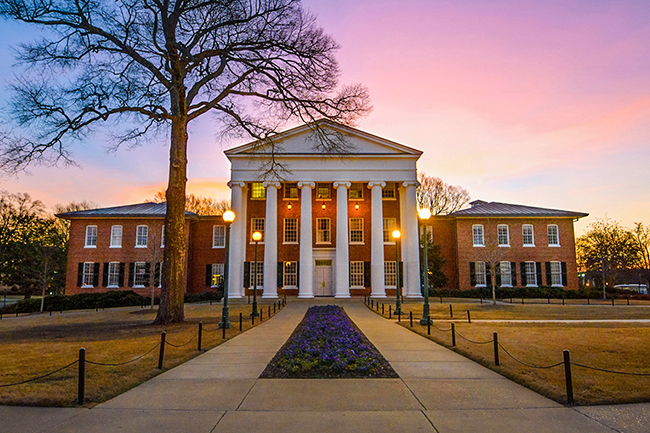 Efforts by faculty, staff and students to excel in their pursuit of knowledge have given the University of Mississippi, the state’s flagship university, new momentum in its mission to lead the way in learning, discovery and engagement for the state and nation.

UM has been ranked among the nation’s best public institutions in several third-party evaluations of academic and research performance, and the university has climbed in recent measures of those areas.

In 2016, the university was included for the first time among the elite group of R1: Doctoral Universities – Highest Research Activity by the Carnegie Classification of Institutions of Higher Education, the definitive list of the nation’s top doctoral research universities. UM is among a distinguished group of 115 institutions, including Harvard, MIT and Johns Hopkins in the highest research category, which includes the top 2.5 percent of institutions of higher education.

The university also achieved its highest-ever standing in the 2017 U. S. News & World Report annual rankings of Best (Undergraduate) Colleges and Universities, where UM tied for No. 64 in the Top Public Universities category, up seven places from the previous year’s rankings.

The business (including accounting) and engineering programs were also ranked nationally.

“These achievements and rankings reinforce our flagship status and are a testament to the value of our degrees, the impact of our research and the competitiveness of our students, staff and faculty,” Chancellor Jeffrey Vitter said. “While they provide important benchmarks for our university, we remain committed to achieving even higher levels of excellence.

“We will focus upon growing the reach and impact of Ole Miss to continue making a positive difference for Mississippi, our nation and the world.”

The university also performed well in the inaugural ranking of U.S. colleges and universities by The Wall Street Journal and Times Higher Education publications. This measure ranked UM 74th among all the nation’s public universities.

This ranking constitutes a comparative assessment of more than 1,000 colleges and universities, measuring factors such as university resources, student engagement, outcomes and environment. The latter includes a gauge of the university’s efforts to build a diverse and inclusive environment for students, faculty and staff.

“Many of our academic offerings continue to gain exposure and recognition,” said Noel Wilkin, the university’s interim provost and executive vice chancellor. “I fully expect this trend to continue because of the quality and commitment of our faculty and staff.”

Success in international education and research partnerships contributed to the university’s standing on U.S. News’ 2017 list of Best Global Universities. Among the top 1,000 research universities in 65 countries, UM ranked in the top third on this year’s list.

“The reputation of the university in national and international research circles has been steadily growing over the past few decades,” said Josh Gladden, interim vice chancellor for research and sponsored programs. “We have seen this trend through an increasing number of national leadership positions in societies and consortia, an increase in the number of grant awards, as well as in statistical reports such as U.S. News and World Report.

“It is an exciting time for the research community at the university, and I look forward to increasingly higher impact of UM research.”

U.S. News and World Report ranked two of the university’s graduate academic programs in the top 25 nationally among public universities: the online MBA program (No. 19) and pharmacy (No. 23). The university’s efforts to achieve excellence in all its endeavors also has helped recruit talented students to learn and contribute on all its campuses. The Chronicle of Higher Education named the university as the nation’s eighth-fastest growing among both public and private colleges in its Almanac of Higher Education, moving up from 13th in 2014.

The university’s incoming freshmen continue to be better-prepared for the rigor of college, posting an average ACT score of 25.2 in fall 2016, surpassing the school record of 24.7 set in 2015. The high school GPA of incoming freshmen also increased, growing from 3.54 to 3.57, another university record.

“Ole Miss is committed to student success,” Vitter said. “The demand for a University of Mississippi degree is unprecedented, and the success of our programs and initiatives aimed at helping students stay in school and graduate is clear in our increasing retention and graduation rates.

“Each and every day, our faculty and staff demonstrate strong commitment to transforming lives through higher education.”