$6M budget for Oxford University Transit (OUT) approved by city 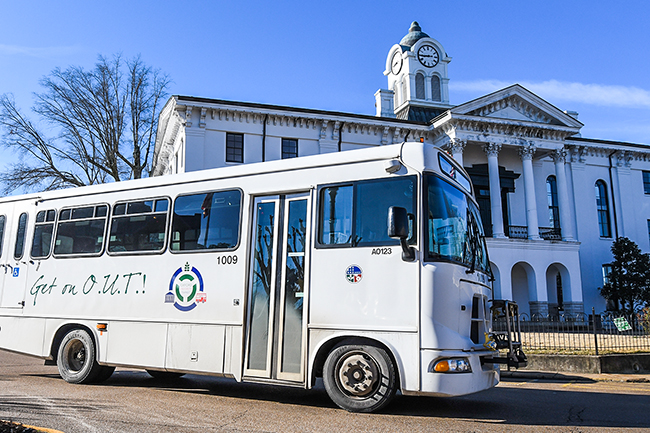 An Oxford University Transit bus moves around the Square in Oxford, Miss. on Thursday, February 23, 2017.

As the Oxford University Transit system continues to grow, so does the number of buses, the number of routes traveled and the cost of providing the service.

The Oxford Board of Aldermen approved a $6 million budget Tuesday for the 2017-2018 fiscal year for the OUT system, which increased from the current budget of $5.3 million.

OUT needs to approve its budget early in the year so it can be submitted to the Mississippi Department of Transportation by the end of February to apply for transportation grants that pay 80 percent of capital costs and 50 percent of the operational costs.

This new budget won’t go into effect until October. The city’s fiscal year runs from Sept. 30 to Oct. 1.

Most of the increase is due to adding two new routes — a campus internal route and one additional home football game route. The budget also includes wrapping the buses in blue vinyl, five new low-floor buses to serve the new campus routes and construction funds for the operation and maintenance facility’s expansion on McLarty Road.

OUT carried approximately 1.2 million people in 2016 and projects that number to grow to 1.5 million.

The University of Mississippi will absorb the costs for the new routes.

Bus fare revenue is projected to be $50,000. University students ride the OUT buses for free since the university pays more into the bus service to subsidize the students’ fares.