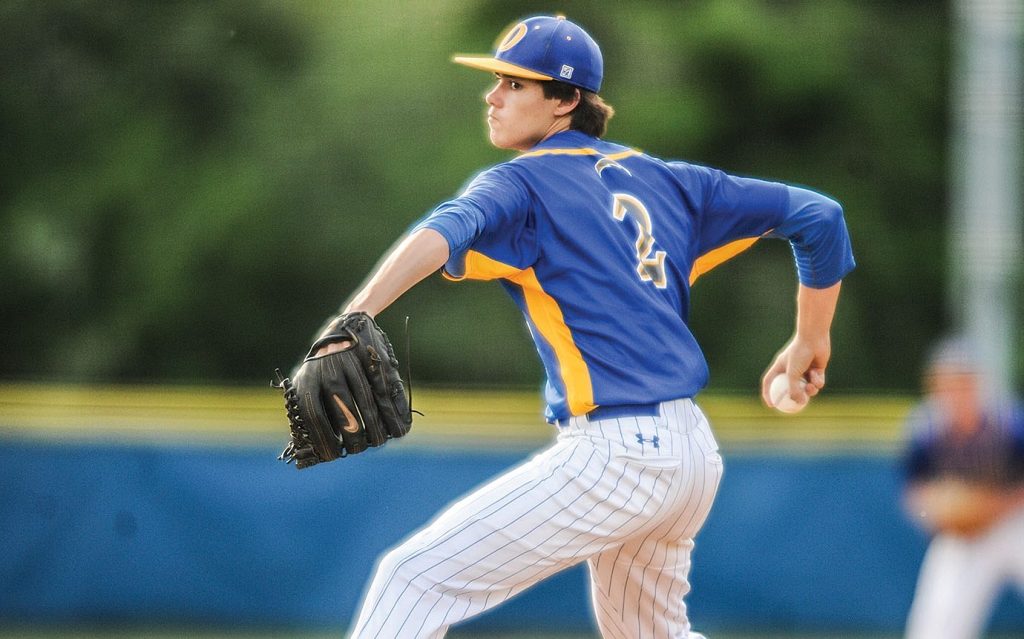 Senior right-hander Carson Stinnett (2) will be one of the top arms this spring for an Oxford team that’s aiming for a third straight MHSAA Class 5A championship.

For Oxford baseball, the mission is simple — a quest for a third straight state championship. The Chargers are coming off winning their third championship overall, and if they want to find themselves at Trustmark Park in Pearl come May, they will have to fill some pretty big voids.

The Oxford quartet of Jason Barber, Houston Roth, Thomas Dillard and Grae Kessinger have moved across town and are already contributing with the Ole Miss baseball team. That has left Chargers head coach Chris Baughman with a tough task of replacing four players with Southeastern Conference talent who took with them a bulk of last season’s production.

“It’s all we talk about,” Baughman said of chasing title number three. “That’s our ultimate goal. We know we’re not as dominant. We don’t have four SEC players, two SEC arms, that we can run out there on Tuesday and Friday. But we also know that we’re talented enough, and this group’s tight enough that some things we weren’t necessarily good at last year, this team is.”

The loss of Barber and Roth on the mound is the ultimate spots that need to be replaced. The duo combined for a 20-2 record last season with Roth tossing a 0.44 earned run average and Barber a 1.08 ERA. They also combined for 237 strikeouts. Baughman is looking at seniors Carson Stinnett and Reed Markle to become his top two arms to anchor a pitching staff that has plenty of depth. In nine appearances, Stinnett went 3-4 with an ERA of 2.80 and tossed three complete games. Markle also had nine appearances with a 3-1 record and an ERA of 1.75.

For the other eight spots on the field, Baughman has a plethora of options as the Chargers are two- and three-deep at each position on the field on his depth chart. Many players are listed on multiple positions depending on who is pitching on a given night or earning rest. One fact is known, Oxford has so many capable layers that the lineup will more than likely look different every game outside of a name or two.

“I don’t think we’ve had this many guys at every position that I truly felt could play,” Baughman said. “There are two guys in this lineup that probably won’t sit all year. Everybody else is probably going to sit at some point. Whether it be a game, an at-bat or a pinch hit, whatever that situation may be. But Drew (Bianco) and Ben (Bianco) are who we need in there game in and game out whether they are hot or cold. I don’t know that I’ve ever had seven spots that I felt could be filled by 14 kids.”

Hungry for their turn

There are seven seniors on this edition of the Charger roster. Anchored by Ben Bianco, Chase Kessinger, Stinnett and Markle, it is a group that has been laden with experience at the highest level of high school baseball competition in Mississippi and even travel ball. But with the talent that has been on the Chargers’ roster the previous seasons, it has not provided many opportunities to shine. 2017 provides them with that opportunity.

“It’s a talented group,” Baughman said of the seniors. “Ben coming back is going to help. Reed and Carson on the mound have thrown innings. We’ve got guys in that class that are going to contribute. It’s unique in the fact that a lot of those guys are going to have to be role players. We may not have eight starting seniors out there. … It’s also a unique group in the fact that they’ve sat behind that talented group for two years now. They are very, very hungry to come in and contribute and be the guys now.”

Oxford begins their season with three games in the New Albany Classic beginning on Friday against TCPS.