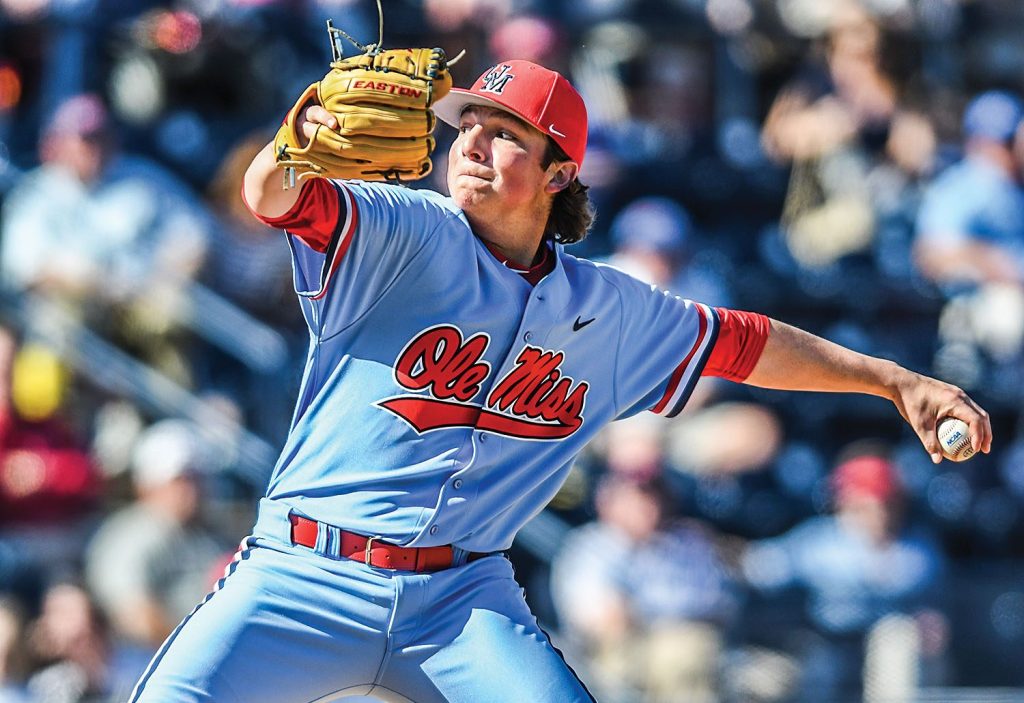 Left-hander Ryan Rolison is part of a highly touted freshman class that’s made an immediate impact for Ole Miss. The Rebels have played 10 true freshmen with four of them being regular position players.

The Rebels have already gotten plenty of use out of a group of freshmen that arrived on campus amid much fanfare. Ten of Ole Miss’ 15 true freshmen have played while four of them have been regulars in the lineup.

Grae Kessinger has started every game at shortstop while Thomas Dillard, another Oxford High product, has gone back and forth between left field and designated hitter to keep his bat in play. Known for his power, Dillard, who led all high school players last year with 16 home runs, has yet to go deep but leads the Rebels (4-0) with a .583 average heading into today’s 4 p.m. series opener against UNC-Wilmington at Swayze Field.

“If you watch his (batting practice), you can almost think that it’s a home run derby and then he gets in the game and has a really mature approach,” Ole Miss hitting coach Mike Clement said. “He kind of takes what they give him. If they’re going to stay middle-away, he’ll take his base hit up the middle. … He’s come in and not missed a beat through four games.”

The youngsters got their first taste of the college game in front of record crowds at Swayze Field last weekend in the Rebels’ opening series against then-No. 10 East Carolina and looked anything but out of place. Dillard collected four hits in his first eight at-bats, catcher Cooper Johnson showed off his plus arm strength with a pair of pickoffs and an easy nab of a runner trying to steal second, first baseman Cole Zabowksi collected two of his four hits with a homer and four RBIs in Sunday’s sweep clincher, and Greer Holston and Ryan Rolison combined for 1 1/3 innings of one-hit relief in the series.

“You didn’t know what you were going to get,” head coach Mike Bianco said. “You hoped you would get what you got in practice. You hoped that you would get a Grae Kessinger, Thomas Dillard, Cooper Johnson and others that play like they’ve played the last six months on campus, but you don’t always get that, especially with the pressure. Even though they’re your fans, it adds to the pressure. I thought our guys handled it really well.”

It was Will Ethridge’s turn to shine in Ole Miss’ 16-4 rout of Arkansas State on Tuesday. Ranked as the nation’s No. 49 prospect by Perfect Game coming out of prep power Parkview (Lilburn, Georgia), the 6-foot-4 Ethridge scattered two hits and struck out 10 in five innings to win his collegiate debut, tallying the most strikeouts for an Ole Miss freshman since Justin Cryer also fanned 10 against South Carolina a decade ago.

“Coach B(ianco) was calling some really good pitches,” Ethridge said. “I was just focused on hitting my spots and getting guys to foul balls off and then the slider, which was the wipeout pitch working.”

Ethridge combined with three other freshmen — Rolison, Holston and Houston Roth, who pitched two scoreless innings in his first appearance of the season — to punch out 19 batters in the win.

“They were all the guys we had to face (in the spring and fall), and they were tough competitors up there,” outfielder Will Golsan said of the freshmen pitchers. “They transitioned well, and they’ve played well so far.”