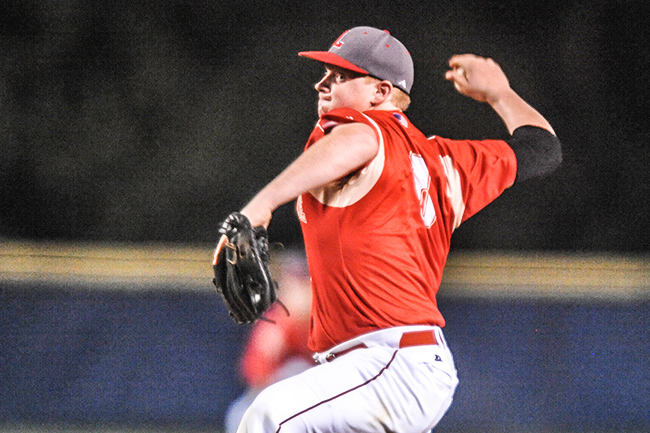 Lafayette’s Luke Gossett (8) will be one of the top arms this spring for head coach Greg Lewis, who’s in his second year back at the helm.

Friday begins the second year of Lafayette baseball head coach Greg Lewis’ second stint with the Commodores. After taking over the team last season when former head coach Patrick Robey took the same job at Madison Central, Lewis marched his team to second place in Region 2-4A as well as to the second round of the MHSAA Class 4A playoffs before being swept by Houston.

With another full offseason under his belt and heading into Friday’s season opener at Lewisburg (7 p.m.), Lewis is feeling confident about his team’s chances in 2017.

Pitching will be the main concern to start the season for Lafayette, having to replace the production lost with Mack Bishop not around to eat up innings like he did last year. Lewis is going to be relying on the arms of Luke Gossett and Will Ard, who look be the No. 1 and 2 guys in Lafayette’s pitching staff. The newly installed pitch-count rule that takes effect this season is something teams are going to have to be aware of also, adding another layer of strategy during a game.

“I feel like we’re going to have to have guys that go two or three innings,” Lewis said. “I don’t think we have that one workhorse like Mack who can go out there and give you those five, six, seven innings. This group, especially with the pitch count and everything, I think we’re three-to-four-inning guys. They’ve made me feel good because all of them are throwing strikes.”

While the mound may not be an area of concern at the start of the season for Lafayette, Lewis is hoping the guys playing behind their pitcher can shore up the defensive woes that plagued them for most of the season last year. Ard, Gossett and Ross Ingram are returning infield starters and, in Ingram’s case, catcher, which Lewis feels is a positive as they have a year of experience. Ground balls getting through and routine pop-ups proved problematic for Lafayette at times during the season.

“We’ve got to play defense,” Lewis said. “We really struggled on defense last year all the way to probably the Ripley game last year. We finally got it turned around at the end and started playing better. Hopefully with the returning players, (John Tate Roberts) at shortstop and (Gossett) on third, it solidifies that part of the infield. Those key components should make us a little better, and it has so far.”

In the outfield, Lafayette returns Dillon Woods and Xavier Martin while Lewis is adding Corey Taylor and Braxton McCord into what is now a four-man rotation. Lewis also noted sophomores Ben Harper and Foster Westbrook might find playing time in the outfield as well.