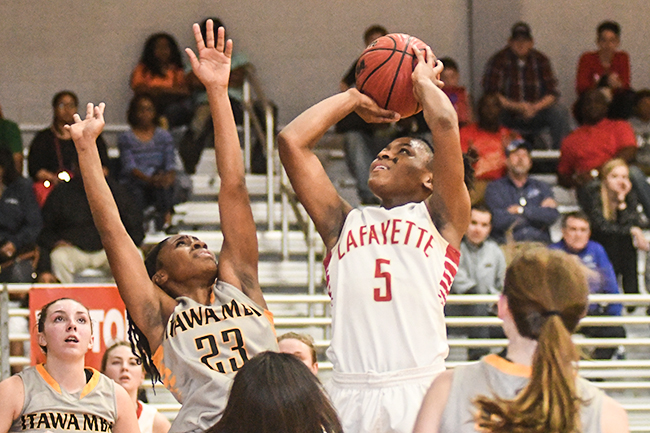 Lafayette High's Xhiir Burgess (5) shots against Itawamba's Jada Ashby (23) during their second round game in the MHSAA Class 4A playoffs. The Commodores won 50-25 (Bruce Newman)

The goal of every high school basketball team in Mississippi is simple at the start of the season — make it to Jackson and what the Mississippi Coliseum is referred to as ‘The Big House.’

The Lafayette High girls basketball team can count themselves as ‘Big House’ bound after handily defeating Itawamba AHS, 50-25, in the second round of the MHSAA Class 4A playoffs at the LHS gym on Friday night.

The Commodores (27-3) will play McComb in the quarterfinal round on Thursday at 7 p.m. in the Coliseum.

After lacking energy and struggling to put points on the board until late in the second half against Houston in the first round last Monday, Lafayette looked more like the team that put 80 points on Byhalia in the Region 2-4A tournament last week. The Commodores took a 16-2 lead off of stingy defense after the first quarter. They kept the pressure, and the pedal down, with a 32-7 halftime lead, all but assuring themselves of a return trip to the capital city for a second straight season.

“It was a different ball team in the first half tonight than the entire game (last Monday),” Lafayette head coach Shayne Linzy said of his team. “We were just more energetic. It seemed like there was no sense of urgency on Monday. Tonight, in the first half, you could almost see, ‘Hey, we need to amp it up. We need to play tonight and be more ourselves.’”

The energy level came down a little bit after the first half for Lafayette, which scored only seven points in the third quarter. Itawamba’s inability to put any offense together helped the Commodores’ slow start to the second half not become much of an issue as they took a 41-14 lead early in the fourth quarter and were able to hang on for the win.

Shaniyah Buford scored a game-high 18 points and was the only Commodore in double figures. Xhiir Burgess and Mariah Holland each scored seven points while Orianna Shaw chipped in six.

The road to Jackson may have come easy for Lafayette, doubling their opponents on the scoreboard in each of their first- and second-round games, but their first challenge in Jackson will prove more difficult to put away.

“We kind of knew based pretty much on a lot of things from last year’s teams that were in Jackson and what they might have return, we knew that we would run into McComb,” Linzy said. “We look forward to having that challenge. … They like to get out in transition and score their points that way. They remind me a lot of Byhalia.”