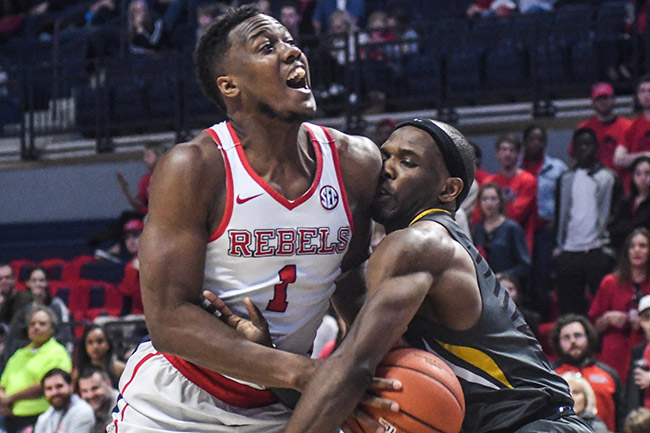 The last time Ole Miss and Missouri met, the Rebels escaped with a 75-71 road win. When the two teams got together on Saturday, it was more of the same.

The Tigers are fighting to stay out of the Southeastern Conference basement with the other Tigers from LSU but played like a team that is fighting stay atop the SEC.

With a game-high 28 points by junior guard Deandre Burnett and 15 more from freshman guard Breein Tyree, the Rebels held on to defeat Missouri 80-77. The Tigers missed two 3-point shots in their final possession to attempt to force overtime as the clock expired.

After an overtime win at rival Mississippi State last week, Saturday’s game was Ole Miss’ fifth win by less than 10 points in their past seven victories.

“I’m used to them,” Ole Miss coach Andy Kennedy said of the close wins. “Our margin for error is just too small. Typically, if it’s a blowout, it’s not going to be good for us. So I want them close. We’ve lived in this world all year, and if we’re going to have success, we’re going to have to live there the remainder of the regular season and going into the (SEC) tournament.”

Freshman guard Frankie Hughes led Missouri with 22 points off the bench while junior forward Jordan Barnett added 14. It was the Tigers’ 34th straight loss on the road.

“I was real proud of our guys for fighting back,” Missouri coach Kim Anderson said. “There were a couple times we were down double-digits and we got some great, great play off our bench. All year, we kind of struggled being consistent and tonight was no exception. … We had a chance to win and things just didn’t go our way at the end.”

Ole Miss senior forward Sebastian Saiz was quiet for most of the game, having not recorded a single point or rebound in the first half. Saiz, who leads the SEC with 18 double-doubles and is ranked fifth nationally, scored 10 points and pulled down seven boards. Three of those points came at a crucial time as he hit his second 3-pointer with 2:42 remaining in the game to put the Rebels back in front, 74-72.

“(Saiz) hits a huge 3 and we all know how he’s struggled from 3 in the SEC, So I thought it was a huge 3 for him,” Kennedy said. “We were just trying to put pressure at the basket.”

The Rebels travel to Alabama on Wednesday for a 7:30 p.m. tip.