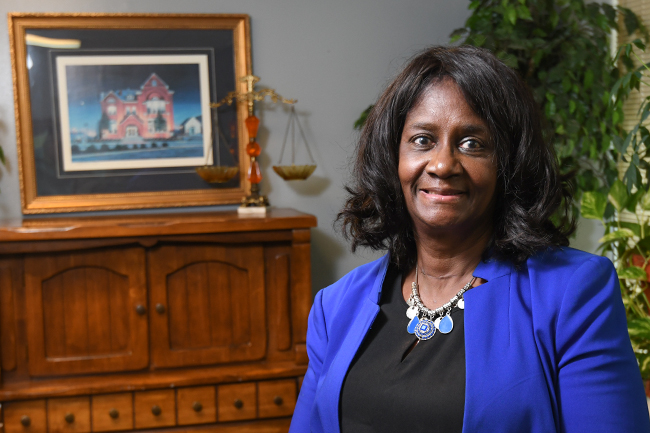 Bruce Newman Attorney Carnelia Fondren in her Oxford law office where she specializes in family law.

During Black History Month, on each Sunday, the EAGLE will feature a long-standing local business owned and operated by African Americans citizens.

Carnelia Fondren didn’t become an attorney to get rich. While she admits it sounds cliché, she says she did it to help members of her community.

Some attorneys can claim the same, but Fondren has a proven track record.

Born and raised in the West Spring Hill Community, Fondren went to the University of Mississippi where she graduated in 1979 with a bachelor’s degree in marketing. She applied to get into the Ole Miss Law School and was accepted; however, she chose a different path for herself.

For 12 years, she worked for AT&T before the breakup in the late 1980s when it became BellSouth. It was then she decided to take the Ole Miss Law School up on its offer and enrolled into law school. She was in her 30s, married to Wade Fondren and had three small children, Wade Jr., Jeremy and Kristen.

After passing the Bar, she worked for Rural Legal Services for about 18 months.

“It was really the best place to start working,” Fondren said of Rural Legal Services, which helps people who cannot afford a lawyer in civil and family law cases. “They teach you a lot about family law in a hurry because you have so many cases. There are so many people out there who need help. It was a really good experience.”

Fondren, 60, left RLS and worked for District Attorney Jim Hood for 10 years in the DA’s office.

“When I was a prosecutor, I did a lot of domestic violence cases and sexual assault and those cases can be pretty depressing,” she said. “But in the end, you know you did some good and made sure it wouldn’t happen again to someone else.”

In 2005, she decided to go out on her own and open her own law firm on North Lamar Boulevard where she’s been since, specializing in family law, with an extensive background in civil and criminal trial practice work involving families, children, domestic abuse, housing law, disability issues, social security and elderly rights.

She is involved with the Family Crisis Services of Northwest Mississippi and she’s Lead Advisor for the Zeta Phi Beta sorority on the Ole Miss campus. She’s also active in the Lafayette County Democratic Party where she’s served locally and on the state level.

She does a lot of pro bono work still for Rural Legal Services and has been known to help her fellow Lafayette County neighbors.

“Sometimes clients come in and can’t afford the regular fees and I’ll work with them,” she said. “We all hope that when we pass on, we’ve done some good. Even if you don’t become rich, that’s not what makes a person.

“That’s how I practice law.”