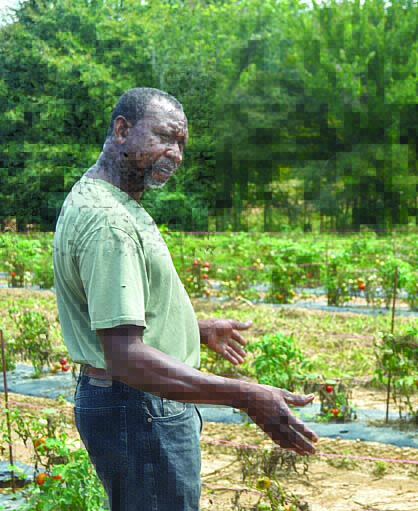 Steve Richardson started farming when he was thirteen when he took over his father’s cucumber market garden in his hometown of Bolton, Mississippi.

Each month, MSAN will highlight one of the many hard-working producers here in Mississippi making a difference in their communities by committing to natural, sustainable, and regenerative models of agriculture. It’s not just about good food; it’s about good people.

Steve Richardson started farming when he was thirteen when he took over his father’s cucumber market garden in his hometown of Bolton. He always loved being outside and working with vegetables, but he didn’t think he wanted to pursue agriculture as a career. But at the suggestion of a high school vocational agriculture teacher, he learned that there were more opportunities in agriculture than what he was accustomed to. So he majored in agriculture in college, then worked for the state’s soil conservation service before beginning his career as Mississippi State’s Tate County Extension Agent where he worked until he retired in 2006.

Today, Steve works full-time on his 75-acre vegetable farm in the North Mississippi village of Tyro, just north of Sardis Lake. An efficiently-run one-man business, Steve values his customers and grows a variety of mixed fruit and vegetables which keep them coming back to him. From bell peppers, tomatoes, corn, and squash to watermelons, honeydew, cucumbers, and peas, the farm maximizes space and utilizes conservation practices such as irrigation, black plastic row covers, cover cropping, and crop rotation to keep costs down and production high.

Steve sells his products to local grocery stores in North Mississippi as well as farmers markets, including the Tate County Farmers Market in Senatobia, which he founded in the early 1990s. He explained to me, “I used to try to do every farmers market there was. We did Monday, Tuesday, two markets on Wednesday, two on Thursday, and we couldn’t go to one on Friday because I made deliveries [to grocery stores] and had to load trucks for five markets on Saturday.” Steve got help from locals needing work when he could, but more often than not, it was just him picking and loading up. “Sometimes, I’d get in bed at three o’clock on Saturday morning. And then I’d be back up at five o’clock to go run a market. So there’s no way I could do a market on Friday. At all.” Now, Steve sticks to three Saturday markets and concentrates more on grocery store sales.

Asked about the biggest challenges to his work, Steve emphasized the lack of available workers. “I pay them good, treat them good, but they don’t want to work.” He explained that young people just don’t have the opportunities or the desire to go into farming. With the unavailability of land and the expensive prices of equipment, Steve sees the era of small farmers coming to a close. “I wish I could get everybody into farming, but unfortunately I can’t recommend it right now.”

On the other hand, he sees consumers at the farmers markets and grocery stores craving his locally grown produce more and more. “People’s awareness about food is broadening. At the farmer’s market now, we’re seeing a lot of people coming because they want fresh vegetables, they want things locally grown. And the grocery stores that I have, they put up ‘home grown’ signs and people buy it quicker. They know it’s not shipped in, they know the area it comes from, and they feel like ‘that’s a part of my community,’ it comes from right here.”

Although it is demanding work, Steve remains committed to feeding his community. His philosophy about farming is deceptively simple, and it speaks volumes about his own belief in healthy communities and food systems. “If there wasn’t farming, somebody wouldn’t eat. Not just local — everywhere. Everything you see that comes out of a can — some farmer grew it somewhere. So my philosophy about farming is we need it. We got to have it in order to feed the mouths that need to be fed.”

Steve uses his passion for agriculture and background as an extension agent to bring people in the region together. He has an EBT/SNAP card swiper at his booths at farmers markets, and is proud that almost all of the markets in the region accept food vouchers. And even though he has cut down on his farmers markets, he still sells at the Tate County market that he established. “People say, ‘that’s your market.’ I got a lot of people that look for me down there, and if they don’t see me, they’ll turn around and leave.”

Find Mr. Richardson selling his produce at the Tate County Farmers Market, from 7 a.m. to 2 p.m. Monday-Saturday during the growing season. The market is located on Norfleet Drive in Senatobia.

Yellowstone National Park in winter is a dream come…