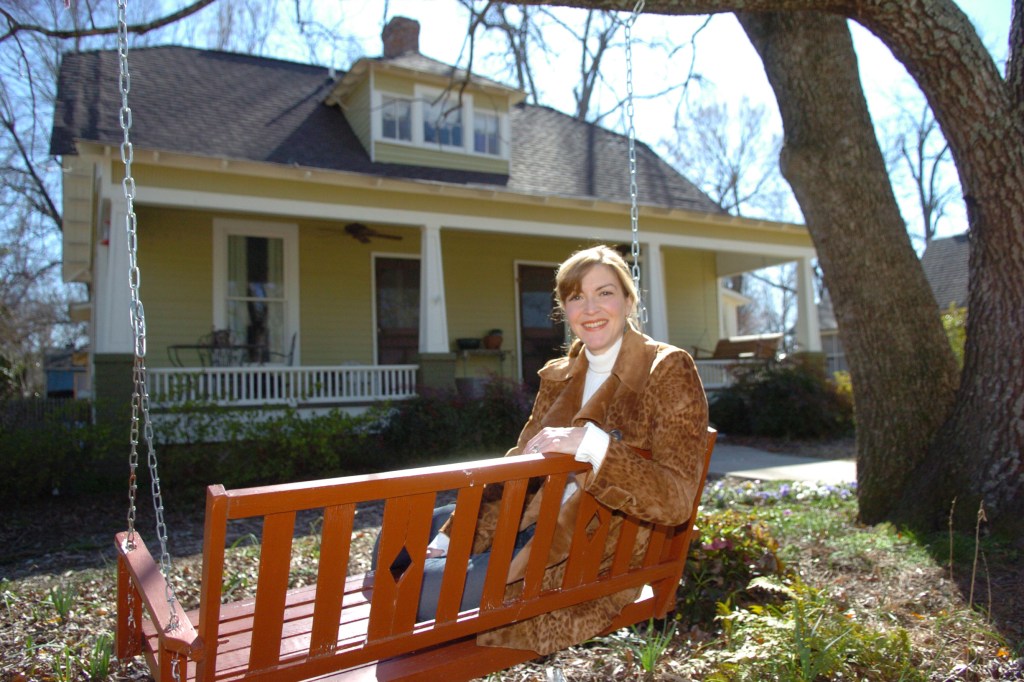 Sarah Frances Hardy, who has been a Browning Club member since 2014, gave a presentation on progression in American Culture from 1895 to the present at the joint meeting of the Woman’s Book Club and the Browning Club on Feb. 14. (Bruce Newman)

On Tuesday, Feb. 14, the Woman’s Book Club and the Browning Club, gathered for the first time in almost a century at Cedar Oaks.

The two clubs, both established in 1895, shared refreshments provided by both groups, and were entertained with a special presentation prepared for the meeting.

The Woman’s Book Club provided finger sandwiches of chicken salad, chutney, and pimiento cheese from the recipes of Elaine Hoffman, Russell Scott, and Julie Walton, and the women sipped on champagne punch, prepared by Caroline McIntosh, a Woman’s Book Club member since 1998.

Additionally, there were the delights of Jo Ann Bell’s asparagus rolls and Betty Hoar’s cheese straws, members of the Woman’s Book Club since 1973 and 2004.

The table, arranged by Ann Abadie, Liza Mallette and Caroline McIntosh, included the desserts and finger sandwiches. Each offering was accompanied by a card indicating the club member’s name and recipe, and the year she joined her respective group.

Ginny Terry, president of the Browning Club and member since 2003, welcomed the group.

Lynn Sloan and Mary Ann Fruge introduced the meeting and gave a brief history of each club.

She also discussed the civic work the Woman’s Book Club accomplished during the early 20th century, before there was a rise in government involvement, such as planting trees in the Oxford community and placing fire escapes in the schools. She added that one of their members served as the first woman on the Oxford School Board in 1915.

Sloan also noted the Woman’s Book Club and the Browning Club joined together in 1928 to aid with city improvements by collectively purchasing a street washer, a fire truck, a parking lot, and 24 garbage cans for local businesses and residents.

In closing, Sloan said “This wonderful, eclectic group has expanded my world and does indeed uplift and inspire not just the minds but also the lives of its members.”

Fruge, a member of the Browning Club since 1971, said the Browning Club was established by four women in 1895. They were Mrs. Leavell, Mrs. Johnson, Mrs. Sultan, and Mrs. McLemore, affectionately called “the Faithful Four,” and named the club in honor of Elizabeth Barrett Browning.

The Browning Club served as an outlet for its members to educate each other during a time when attitudes toward women did not include higher education.

Fruge explained these women strived to provide each other with the opportunity to read, explore, and learn from one another.

In particular, Fruge mentioned Mrs. Marjorie Lewis, who served as the Browning Club’s archivist for many years, would often give programs on history, which included anecdotes about the club.

“The Browning Club has enriched my life,” said Fruge “through a mutual appreciation for the arts, love of family and friends, support for each other, and an unquenchable intellectual curiosity.”

Stella Connell and Sarah Frances Hardy, Browning Club members since 2010 and 2014, gave a presentation on progression in American Culture from 1895 to the present.

Connell and Hardy’s presentation covered topics from fashion, two world wars, the Pulitzer prizes, the Woman’s Suffrage Act, the Civil Rights movement, the integration of Oxford’s schools, and the influence of women in politics and professional life over a 120-year period.