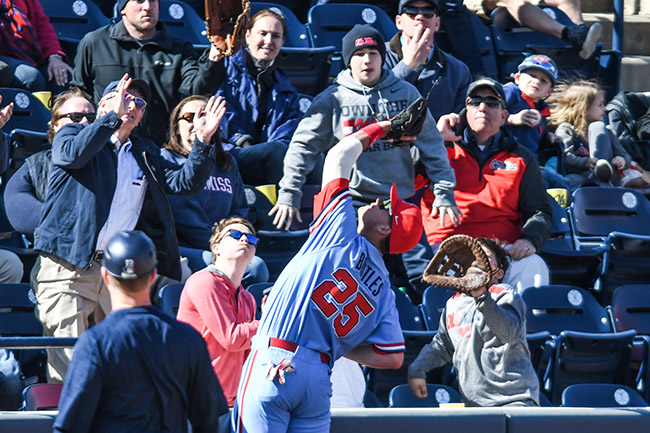 Ole Miss got plenty of offense, more solid pitching from its starter and some timely defense and relief work to stay unbeaten Sunday.

The 24th-ranked Rebels swept their second straight series with an 8-6 win over UNC Wilmington at Swayze Field. Ole Miss (7-0) got to Wilmington’s Logan Beehler for five runs in the third inning and added on against the Seahawks’ bullpen on the way to its seventh straight victory.

“Got to be pleased through two weekends and seven games,” Ole Miss coach Mike Bianco. “Certainly we’ve got a ways to go and there’s some things we’ve got to clean up in a lot of different areas, but it’s hard to imagine we could’ve done much better against some really good competition.”

An 8-2 lead for the Rebels in the ninth was in jeopardy with Wilmington (3-3) getting some help to make things interesting. Connor Green walked three of the only four batters he faced and didn’t record an out as the Seahawks brought the tying run to the plate against Dallas Woolfolk after Robbie Thorburn greeted Woolfolk with a two-run single, but the hard-throwing right-hander got a strikeout, a groundout and a pop-up to close it out.

“It’s a scary, physical lineup, but for Dallas to come in … I don’t know what the speed of the last pitch was, but two pitches before, he threw a fastball in at 95,” Bianco said. “It’s really good stuff coming in there.”

Colby Bortles hit his second home run of the season, a two-run, no-doubter as part of the Rebels’ five-run third, and had three RBIs. Ole Miss had four of its five hits in the frame against Beehler (0-1), who took the loss after allowing six earned runs and walking three in 4 2/3 innings.

“Always good to see a couple hits,” said Bortles, who has four hits in the last two games. “I felt like I was swinging it well. Just kind of had some tough breaks and swinging at a couple of bad pitches. I was just trying to make my head more still up there and try to swing at the right pitches.”

Tim Rowe, in his first start as the designated hitter, went 2-for-4 and drove in a run. Ryan Olenek broke a scoreless tie in the third with a two-run single while Cole Zabowski also had an RBI.

Sophomore right-hander Brady Feigl retired 12 of the first 13 Wilmington batters he faced and took a no-hitter into the fifth before Terence Connelly hit a one-out triple and scored on Jose Hernandez’s single, but Feigl got out of the inning without allowing anything else. Feigl (1-0) scattered three hits, walked two and struck out six in five innings to pick up his first win in his second career start.

He was pulled after Wilmington’s first two batters reached in the sixth for Andy Pagnozzi, who got some leather flashed behind him to help keep the Seahawks from starting their rally earlier. Shortstop Grae Kessinger climbed the ladder to snag Mason Berne’s one-out liner, and after Pagnozzi walked Riley Zayicek to load the bases, Bortles caught Connelly’s foul pop along the third-base wall to end Wilmington’s threat.

“When it was hit, I was like, ‘I better jump really high,’” Kessinger said. “It all worked out. The pitchers were throwing well, so I just wanted to do my best to make a play for them.”

Said Bianco, “(Kessinger) has those instincts. To jump and catch that ball, that’s two runs if that ball gets into the gap. Big play.”

Ole Miss will conclude its eight-game homestand Tuesday against Memphis at 4 p.m.

Watch Bianco and Kessinger talk about the win in following videos.