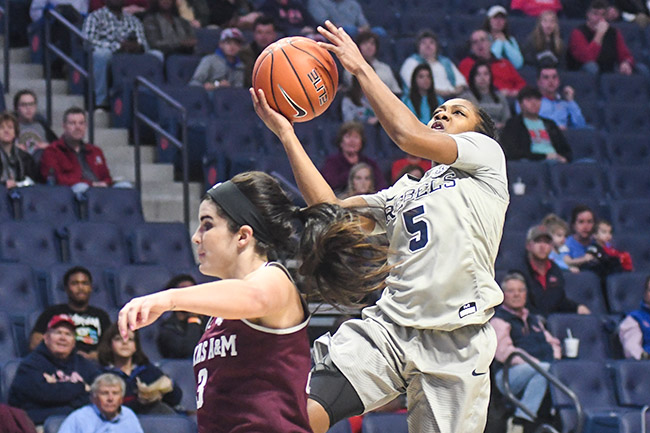 It was Senior Day for the Ole Miss women’s basketball team and they sent their four seniors out in style and took some much-needed momentum into next weeks’ Southeastern Conference Tournament. The Rebels defeated Texas A&M 62-49 inside the Pavilion on Sunday afternoon. It is the first time Ole Miss has defeated the Aggies under head coach Matt Insell.

“A great win for our program to beat a program like Texas A&M,” Insell said.

The Rebel defense held A&M to their lowest point total in a SEC game in program history and also created 24 Aggie turnovers and scored 21 points off of them. Texas A&M’s key player, Khaalia Hillsman was kept in check by the Rebels, scoring 10 points, well below her average and also pulled down five rebounds. The 6-foot-5 center fouled out in the final four minutes leaving the Aggies without any post presence.

“If we could get the ball out of (Curtyce Knox’s) hands and make some one else initiate the offense,” Insell said. “They started traveling and having careless turnovers. …(Hillsman) is a great player, but we had to get into her legs. That was the biggest thing that we did was just keep running her up and down the court.”

The offense was just as productive for Insell as they used a quick start, shooting 3 of 4 from three-point range to take a 19-9 lead after the first quarter. The Rebels cooled off a bit in the second quarter, allowing the Aggies to cut the Ole Miss lead to 23-20 at the break.

The turning point of the game came in the third quarter when Texas A&M had grabbed their first lead of the game using an 8-0 to go up 28-23 when Alissa Alston hit a three-pointer followed up by a layup from senior Erika Sisk to tie things at 28. The Rebels went out to outscore A&M 34-21 to close out the game.

“Our kids executed a gameplan that I asked them to do offensively and defensively,” Insell said. “We got the same exact shots in all quarters. We just didn’t make any in the second quarter. Missed a lot of layups, missed a lot of gimmies, missed a lot of free throws. I told them at the half that they were going to get the same shots in the third and fourth quarter, now if we focus in and make them we’ll win the game. We did that.”

Shandricka Sessom led the Rebels with 13 points and seven rebounds. She also joined the 1,000-point club on Sunday. Shequila Joseph ended her senior night with 11 points, shooting 3 of 7 from three-point range. Taylor Manuel was the third Rebel in double figures with 10.

Joseph, Sisk, Manuel and Bretta Hart were recognized during a pre game ceremony for their contributions to the program. Sisk, Joseph and Hart have been with the program for at least three years years while Manuel was the newcomer, transferring in the offseason.