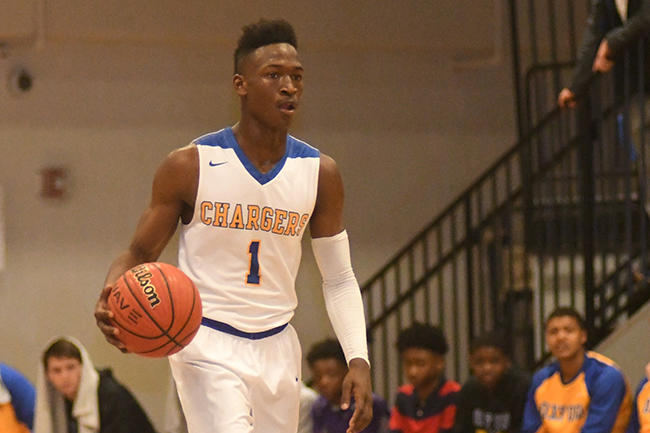 Oxford High’s Jarkel Joiner (1) walks the ball upcourt against Ridgeland in MHSAA Class 5A playoff action last Tuesday. Joiner and the Chargers will face Wayne County in the quarterfinals for the third straight year on Friday at Jackson State University. (Bruce Newman)

The march to Jackson is complete. Eight teams in all six classifications remain as the MHSAA basketball playoffs enter the quarterfinal rounds beginning this week. Two teams remain from the Oxford-Lafayette area with the Oxford boys and Lafayette girls heading to the capital city.

The Chargers (24-7), who defeated Canton 63-62 with two timely free throws by Jarkel Joiner last Saturday, head to Jackson State University where they have a date with Wayne County for the third consecutive season on Friday at 1:30 p.m. The War Eagles have had Oxford’s number, sending them home the past two seasons by a combined four points. Last year saw the Chargers lose 46-43 in the Mississippi Coliseum.

“We know each other well,” Oxford head coach Drew Tyler said. “But we don’t ever meet until postseason. Both our programs were probably playing the best basketball at the right time. This year, we’ve got to find the formula to get past Wayne County and get to the (semifinals).”

Wayne County (18-12) advanced to the quarterfinals after battling it out with Gautier and escaping the second round with a 26-25 victory. The War Eagles have won by a point and have won by as many as 20. They have also suffered losses by as many as 20 points. Tyler is not letting their record or their schedule dictate how they will approach a game plan. The Chargers know who to be wary of in senior guards Tarrance Davis and William Gaines Jr. Davis is 6-foot even wile Gaines stands at 6-5.

“This year’s no different. (Wayne County’s) got long bodies,” Tyler said. “(Davis) is good. He scores, he helps his teammates score. He’s their quarterback on the floor. I think he’s one of the better guards in the state of Mississippi. (Gaines) does a lot of their dirty work for them. Rebounding, just banging under the boards and throwing a lot of body around.”

Battle in the ‘Big House’
While Oxford must win one more game before earning the right to enter the Coliseum this season, or more affectionately known in the basketball world as the ‘Big House’, Lafayette’s girls have already punched their ticket inside. The Commodores (27-3) will play McComb on Thursday night at 7 after defeating Itawamba AHS 50-25 in the second round last Friday. The Tigers advanced by defeating Newton County 63-34.

Last season, Lafayette was seconds away from advancing to the semifinal round, falling to Florence 65-63 in overtime at Jackson State and missing out on a chance to play at the Coliseum. That was a motivating factor to the Commodores all season, and their mission has not changed heading into Thursday night.

“I told them this year, ‘Let’s go one game further,’” Lafayette head coach Shayne Linzy said. “We reached our first goal and that was to get back to Jackson. Now we have to go after goal No. 2 and that’s go at least one game further. Now our next goal is to beat McComb. I think this is going to be a great basketball game. Two teams with similar styles, and we’ll see what happens.”
After not having Azariah Buford in their second-round game after she injured her knee against Houston in the first round last Monday, Buford is cleared and will be able to play against McComb.