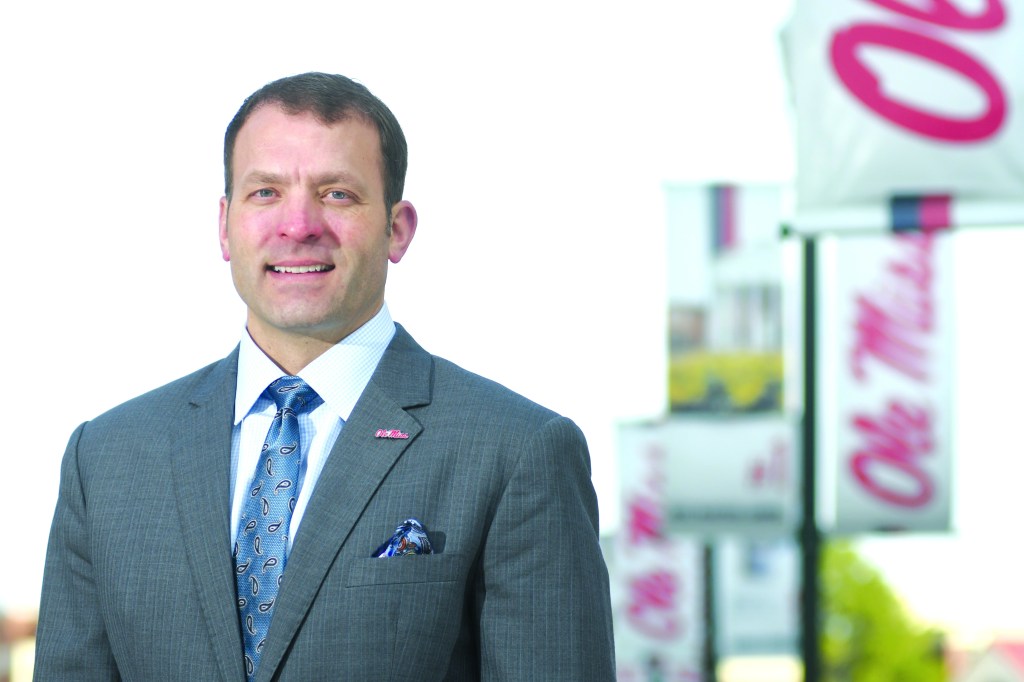 It didn’t take Ross Bjork long to show that things weren’t going to be the same.

Taking in his first baseball game after being hired at Ole Miss in the spring of 2012, Bjork’s Twitter account blew up with requests from students sitting in Swayze Field’s right-field terrace to meet the new leader of Rebel athletics. Bjork obliged, leaving his seat in the press box to shake hands and take pictures with many of them in a move his peers could hardly believe.

“People were sort of blown away that the athletic director would go out and do that,” Bjork says. “I think early on it set the tone that things are going to be different.”

Nearly five years after taking over as Ole Miss’ athletic director, accessibility is still prominent with Bjork. It fits his enthusiastic personality, one that Archie Manning, Mike Glenn and other search committee members thought was exactly what an athletic department toiling in mediocrity needed.

Bjork takes time to respond to supporters and critics on social media while being front and center in promoting the department’s brand and fundraising, Bjork’s specialty. Bjork accompanies football coach Hugh Freeze every spring on the Rebel Road Trip, a multi-stop caravan throughout the Southeast to visit fans in different cities which doubles as an opportunity for Bjork to personally thank them for their support.

“That’s kind of my style anyway personality-wise, but going through what the athletic program went through the previous couple of years before I got here, I knew that was needed to sort of heal and bring people together,” Bjork says.

It’s a style Bjork molded on his own as a youngster knowing he wanted a career in sports. Bjork played football in his native Kansas at Division II Emporia State. He figured one day he’d be a teacher and a coach, but everything changed when he came across a newspaper article about Wichita State starting an academic program for sports management, opening Bjork’s eyes to the business side of college athletics.

Bjork finished at Emporia State with a degree in recreation administration with a minor in business and attended graduate school at Western Illinois. That led to an internship at Western Kentucky and stops at Missouri and Miami, where, at 29 years old, he specialized in ticket sales, fundraising and anything else that generated revenue as the associate athletic director for external relations.

“If it had anything to do with money coming in, I was in charge of that,” Bjork says.

Bjork in 2005 became the senior associate athletic director at UCLA, where the Bruins set record ticket sales for football and men’s basketball with revenue in athletics doubling in Bjork’s first year. He returned to Western Kentucky in 2010 as the nation’s youngest FBS athletic director, but Ole Miss took notice of Bjork’s rapid rise and quickly targeted him to replace the retiring Pete Boone despite Bjork initially turning down the position multiple times.

“When the search firm kept calling me, they said, ‘Hey, your personality fits with what they need. It fits with their culture, it fits with who they are. You’ll be perfect there,’” Bjork recalls.

The Rebels have broken through on and off the field under Bjork, who arrived amid peak frustration with the major sports. Baseball, despite multiple super regional appearances under head coach Mike Bianco, had not been to the College World Series since 1972; men’s basketball was without an NCAA Tournament appearance through Andy Kennedy’s first six seasons, and football was a year into Freeze’s tenure after bottoming out with a 2-10 record in Houston Nutt’s final season.

Ole Miss finally got to Omaha in 2014 and finished fourth. The basketball team won an SEC Tournament title in 2013 and has been to two of the last four NCAA Tournaments while Freeze’s fourth season resulted in the school’s first Sugar Bowl win since 1970.

Meanwhile, the athletic budget has nearly doubled to $105 million while the Forward Together fundraising campaign, which was started before Bjork arrived with a goal of $150 million, has raised more than $170 million for the construction and renovation of athletic facilities. Bjork says he hopes that number reaches $200 million by the end of the year.

“Changing the mindset was everything,” Bjork says. “It was academics, it was competitiveness, it was facilities, it was people. There were a lot of people, they were just kind of down. They didn’t have confidence whether that’s a coach or whether that’s a staff member. It was like, ‘Hey, if we don’t believe, then who will?’”

Likening his job to a campaign that never culminates with an election day, Bjork acknowledges there’s always work to do. Times are once again trying with an NCAA investigation looming over a football program coming off a losing season.

But the recent success is proof Ole Miss can compete at the highest level, Bjork says. He’s sticking with the only approach he knows in trying to help every team meet a different level of expectations.

“Now that we’re being tested, we have to stay together and we have to be maybe even more accessible and more approachable and not just go hide,” Bjork says. “We’re not going to do that. We’ve got to continue to put ourselves out there and continue to strive for that.”