Ole Miss out to play big at Alabama 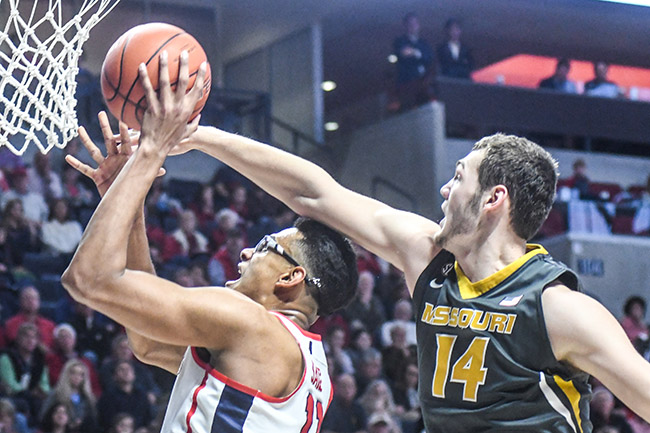 Andy Kennedy isn’t worried about any NCAA Tournament talk. The primary concern right now for Ole Miss’ coach is an Alabama frontcourt that dwarfs his.

Kennedy knows his team is going to have to match that physicality if Ole Miss wants to keep its late-season momentum going on the road. The Rebels head to Alabama tonight (7:30 p.m., SEC Network) looking for their seventh win in the last nine games.

Wins in its final two games would lock up the No. 5 seed for Ole Miss (18-11, 9-7 Southeastern Conference) in next week’s SEC Tournament, but the Rebels still don’t have much of a case for an NCAA at-large bid. Ole Miss enters tonight’s game with an RPI of 71 after eking out a three-point home win over Missouri over the weekend and, with a 1-8 record against top-50 RPI teams, still doesn’t have a win over anybody that’s a lock to make the NCAA Tournament.

The regular-season finale against South Carolina (No. 29 RPI) on Saturday and the week in Nashville give Ole Miss some opportunities to strengthen its case before Selection Sunday, but a loss to Alabama (No. 95 RPI) could be the proverbial death blow.

Avoiding that will require the Rebels to man up against one of the SEC’s stingiest teams. Alabama (16-12, 9-7) is giving up the second-fewest points per game in the league and leads the conference with a plus-6 rebounding margin. The Crimson Tide don’t necessarily have a dominant big but instead use a host of big bodies to clean up inside.

Alabama has four players averaging at 4.5 rebounds a game. Bola Olaniyan is the Tide’s top rebounder at 6.4 a game while 6-foot-8 freshman forward Braxton Key is averaging a team-high 12 points and 5.7 boards. Alabama also has 6-10 center Jimmie Taylor and 6-9 forward Donta Hall to throw at the Rebels, which could be problematic for an Ole Miss team that’s gotten smaller as the season has progressed.

“We’re going to have to be better at what we do than they are at what they do because it’s two polar opposites,” Kennedy said. “We’ve been guard-centric, and we’re small on our frontline just based on personnel issues.”

Ole Miss does have a counterpunch in senior forward Sebastian Saiz, the only player in the SEC averaging a double-double. Saiz has combined for 33 points and 17 rebounds the last two games after going the previous three without a double-double, and the Rebels will need him on the court as long as possible against Alabama’s formidable frontline.

“We need Sebas to try to stay out of foul trouble, and that’s been problematic for him as of late,” Kennedy said. “That’s a trend you’re seeing where his numbers have not been as good because a lot of times he’s been in foul trouble.”

The Rebels will also have to play more consistent defense — they gave up 51 second-half points to a Missouri team that’s barely averaging 68 per game — and limit the amount of possessions they cough up with points likely being at a premium. Ole Miss turned it over 21 times in its win at Mississippi State and 17 times against Missouri after a stretch where it committed 11 turnovers or less in six of seven games.

It’s the formula the Rebels have to follow to have any chance of keeping hope alive.

“We’ve got three more guaranteed games, and at this point, we’re just trying to go 1-0 every game,” Tyree said.