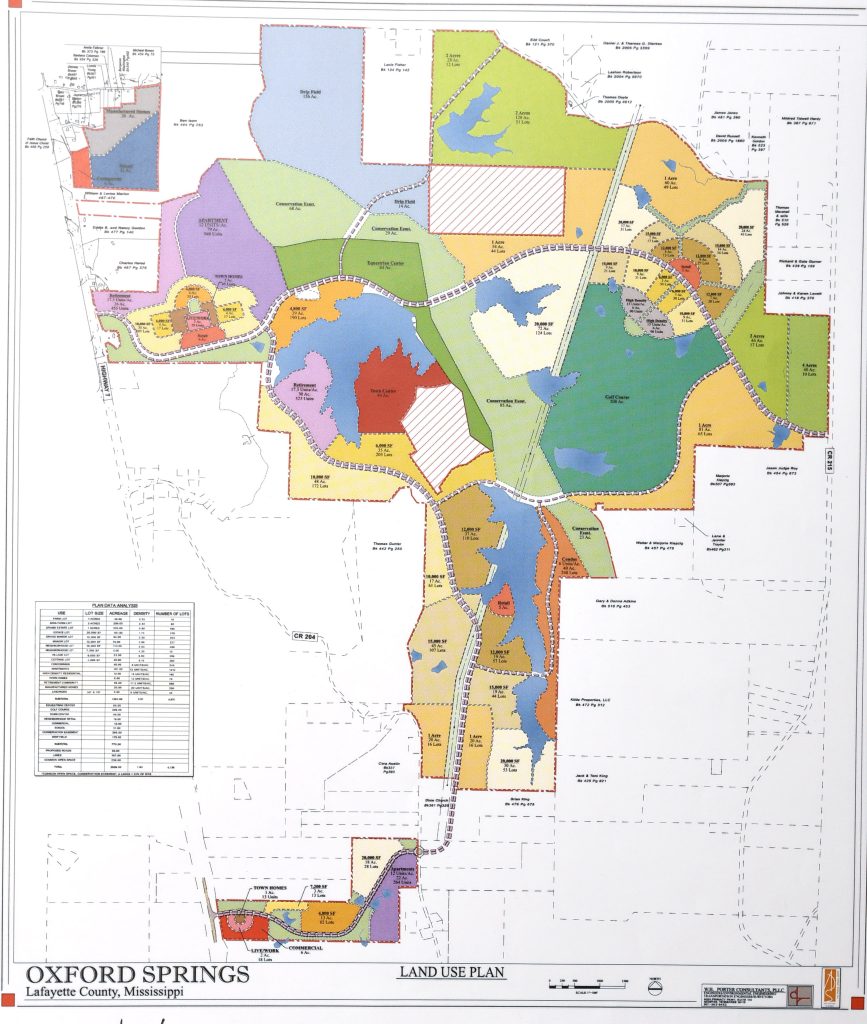 It’s been in the works for decades and finally, a verifiable master plan has been unveiled for the Oxford Springs development near Abbeville.

Architect Corey Alger went before the Lafayette County Planning Commission Monday evening to give a presentation with maps and inform county officials of what developers plan to create, as well as gain information on the process in developing the project.

The 2,600-acre development is a massive undertaking that took a year to create, according to Alger. It will include an 85-acre equestrian center, golf course, 44-acre town center, town homes, condos, apartments and 200 acres of lakes, as well as approximately 200 acres of undeveloped conservation easement.

A year in the making

For more than two years, developers Lamar Adams and Patrick Sands have been processing the property and making site analysis.

In November 2015, Alger went before the planning commission to inform officials that developers Lamar Adams and Patrick Sands planned to create the development and put to rest rumors that were circulating in the community. Many were wondering if the development would be similar to the previously planned development that would have been so massive some believed it would be incorporated.

“In a nice way, it’s trash,” Alger said at the time about the plan the previous developers had devised. “The previous plan, we feel wasn’t really based in reality.

The first phase is comprised of the equestrian center and 125 acres in the northern portion of the development. Alger said the project has met criteria from the Army Corps of Engineers and the town of Abbeville will provide water for the initial phase following upgrades to their water system the developers will finance. The developers are still in conversations in providing water to the southern end of the development.

Alger said he will return to the planning commission next month to seek site plan approval for the first phase. In the meantime, he’d like to get all his ducks in a row before making that initial request. He’d like to know if this development falls under subdivision regulations or is it a planned unit development (PUD); is this a preliminary or final plat?

“Legally, how do we need to proceed going forward?” asked Alger.

Alger was advised to contact property owners surrounding the development to make them aware of the future plans, as well as bring all the proper documents from Abbeville regarding water and approvals from the state and federal agencies to the next meeting of the planning commission.

The planning commission will next meet on Monday, March 27 at 5:30 p.m. in the Chancery Building.