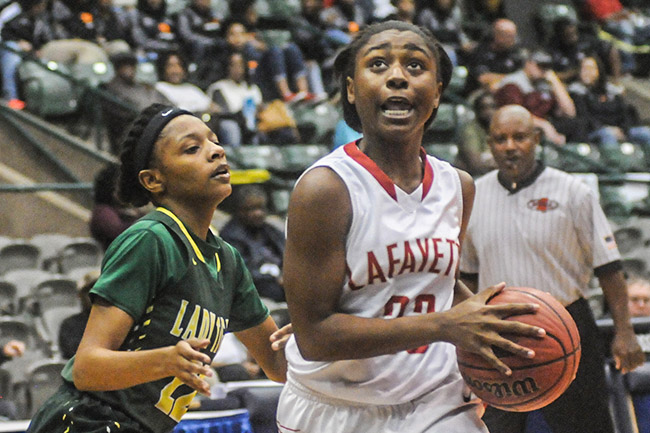 JACKSON — Shayne Linzy just wanted his team to take one step further than they did in last year’s playoffs. After Thursday night, the Lafayette girls basketball team is ready to keep stepping. The Commodores defeated McComb 50-41 in the quarterfinal round of the MHSAA Class 4A playoffs at the Mississippi Coliseum. The Commodores will play against West Lauderdale on Monday at 1:30 p.m. for the right to advance to the championship game.

“I think the goal should always be one game better, just be one game better the following year,” Linzy said. “This was a big hurdle. McComb was ranked No. 1 in 4A the entire year for a reason. I thought it was two great teams playing. I’m proud. We made offensive plays and defensive plays when we needed to.”

A sense of urgency was something Lafayette was lacking in previous games during the Region 2-4A tournament as well as the first two rounds of the state playoffs. The start of Thursday’s game was a different story. The Commodores came out firing, jumping out to a 7-2 lead just two minutes into the game. McComb proved why they are one of the top teams in the state and closed the game for a 14-11 Lafayette lead after the first eight minutes.

“In that first quarter, I was like, ‘Man, I love this team,’” Linzy said. “But good teams, they play. They don’t quit and McComb didn’t. They really punched us, they punched us hard. From that point on in the first half, it was back and forth.”

The Tigers (29-3) managed to come away with a 23-22 lead at halftime after outscoring Lafayette 12-8 in the second quarter. The key moment of the game and turning point occurred in the middle stages of the third quarter. McComb scored the first four points of the quarter, which were answered by a 10-0 run by the Commodores for a 32-27 lead with 1:41 remaining in the third period. From there, Lafayette did not relinquish the lead, expanding it to double digits late in the fourth quarter.

Mylisha Hammond led the Tigers with 14 points and nine rebounds. Destiny Smi scored 10 points to be the only McComb players in double figures.

“We decided to change our defensive play a little bit (in the third quarter),” Linzy said. “We decided to face-guard (Hammond). We knew she was the engine coming in. But I wanted to play her kind of normal, and we were down one at halftime. When they took that lead, it was because of her. That’s when I finally said, ‘If you’re on (Hammond), play her regular and when she gives the ball up, face-guard her and make someone else make a play.”

It was a clean sweep for Region 2-4A on Thursday night inside ‘The Big House’ as Byhalia and Ripley won their quarterfinal games along with Lafayette. Ripley defeated South Pike while Byhalia beat Northeast Jones. The Tigers and Indians will face each other on the opposite of the bracket from Lafayette Monday at noon.

“It’s a hard division,” Linzy said. “I’m excited for Ripley, and I’m excited for Byhalia. I’m always a league type of guy. I root for every SEC team when they’re playing somebody else. Same thing there. We’ve played against those teams and want to see them do well and represent our division. I talked about how hard our division was, and I think everyone can see that.”