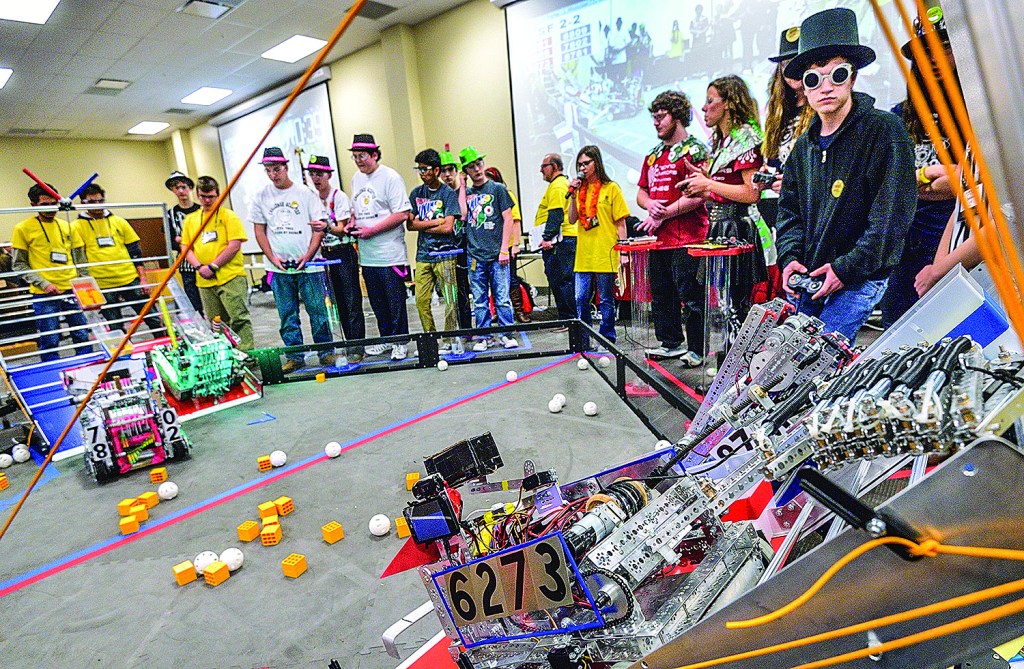 Middle and high school students from across the state will compete in Mississippi’s fifth annual FIRST Tech Challenge robotics competition Saturday at the University of Mississippi.

Hosted by UM’s Center for Mathematics and Science Education, judging begins at 7 a.m. in Tad Smith Coliseum. Public events begin at 10 a.m., and the competition runs through 5 p.m. Admission is free.

Two dozen teams of students, ranging from seventh to 12th grade, will pilot their robots with the hopes of qualifying for FIRST’s South Super Regional competition in Athens, Georgia, later this month. This year’s game is dubbed Velocity Vortex, a challenge where robots are programmed to push or lift different sized balls in a specially designed arena.

“Our goal is to inspire students into learning because we are losing our engineering group,” said Mannie Lowe, FIRST program manager at the Center for Mathematics and Science Education. “Our engineers are aging out and no one is coming up to fill the void in this country.”

The For Inspiration and Recognition of Science and Technology, or FIRST, nonprofit organization was founded 25 years ago by inventor Dean Kaman in an effort to build interest in STEM fields.

Teams comprise up to 15 people, and any organization can form a team, not just schools. Students are guided by teachers, coaches, mentors and community members. Teams must design and build their own robots, keep an engineer’s notebook and do some kind of outreach to promote STEM careers.

“I guarantee you, part of my group would not have otherwise thought about a STEM career beforehand,” said Holly Reynolds, team mentor for Bigweld’s Bots and associate dean for the UM College of Liberal Arts.

Bigweld’s Bots is an all-female team featuring members of Girl Scout Troop 33016, one of two Girl Scout trrops in the state that does robotics. The two troops soon will be featured on “Mississippi Roads” a PBS show.

During the competition, teams of two face off against each other. This allows teams to learn how to work with other teams and enjoy healthy competition at the same time.

Each match plays for 2 minutes and 30 seconds. For the first 30 seconds, the robots operate autonomously, then they are operated by the students through handheld driver controllers for the final two minutes.

The robots can be built out of virtually any material as long as teams follow regulation rules. In the past, some teams have built their robots out of PVC pipe, wood and aluminum. However, the competition is about more than just robots.

“The fun in my job is watching and working with the kids,” Lowe said. “When you see their ‘aha!’ light come on, it is amazing. It’s the realization that they can do this. They can build, they can program, they can design.

“Once they realize that, the world is theirs. They can do whatever they want.”

Some 5,000 teams participate worldwide, and the program has grown tremendously in Mississippi, where only four teams took part in the challenge five years ago.

Students begin designing and building their robots in September when the theme is announced. Last-minute changes are normal, and teams keep working to improve their robots until the competition begins.

“FIRST events are part rock concert, part NASCAR race because of the sponsor logos and team numbers on the side of each robot,” Lowe said. “They are also part chess tournament, due to each team’s different strategy, and just general fun. It’s a big party.”