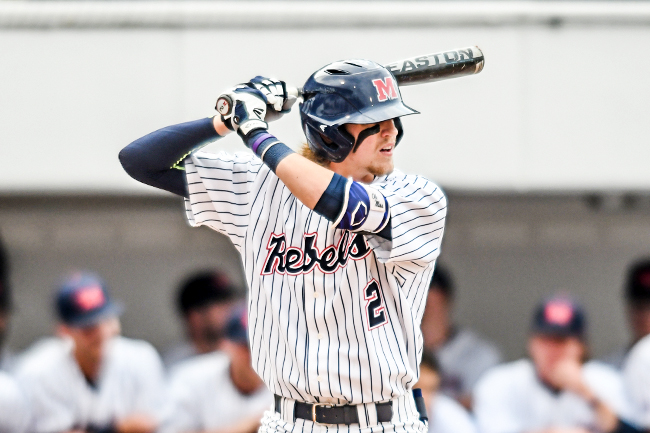 On the eight lineup cards Mike Bianco has filled out this season, Ole Miss’ coach hasn’t put the prototypical leadoff hitter at the top of any of them because, as he put it, there isn’t one on this year’s roster.

“We’ve just got to find a guy that’s going to get on base the most and give us the best opportunity,” Bianco said.

So far, he’s left that job to Ryan Olenek and Tate Blackman.

The duo has shared the leadoff spot with Olenek hitting there four times and Blackman three. The only time neither took the first at-bat for the Rebels was when Olenek served a one-game suspension against Arkansas State on Feb. 21.

Both have been productive at times. Olenek, who’s hitting .280, moved to the leadoff spot for the final two games of the opening series against East Carolina and earned SEC Player of the Week honors after going 6-for-13 on the weekend with two doubles, two runs and a walk, but the sophomore has cooled off with just one hit in his last 12 at-bats.

Blackman has picked up the slack after starting 1 of 11 to raise his average to .310. A preseason All-SEC selection, Blackman, who’s hit leadoff the past two games, has hit safely in three straight games with three hits apiece in two of them.

Blackman’s on-base percentage is .429 while Olenek’s sits at .375. The two have combined for seven walks and 10 runs as No. 24 Ole Miss continues its stiff non-conference slate this weekend with games against Baylor (Friday), No. 19 Texas Tech (Saturday) and No. 1 TCU (Sunday) in the Shriners Hospitals for Children College Classic in Texas.

Blackman, who’s tied for the team lead with four walks and has already stolen as many bases (3) as he did all of last season, is the more likely of the two to get on after grinding out an at-bat and then get himself over, though it’s not something either does often. Olenek walked 11 times and stole just two bases a season ago, but he’s content to fill whatever role is asked of him.

“I expect to do well when I come out to play,” Olenek said. “I just have fun when I’m out here.”

The experiment with Blackman as a table setter may come as a surprise to some considering the junior second baseman spent most of last season as Ole Miss’ No. 3 hitter. He was third among starters in on-base percentage and walks, and the Rebels are trying to utilize his patient approach from the start.

“I’m a short, compact guy and I try to stay through the middle of the field,” Blackman said. “If they throw balls and I can take my walk, then I’m going to take my walks. The reason why I think I’m hitting leadoff is because I take my walks, so my personal approach doesn’t change. It’s staying within myself.”

Blackman has also hit third in a couple of games this season while Olenek has dropped down to the 2-hole at times. There could be others that get a look as Bianco tries to figure out which lineup he likes best, but Blackman and Olenek are the options at the top for now.

“The lineup’s changed a lot, and I think it will continue to change until we really find the one that we think is the best,” Bianco said.