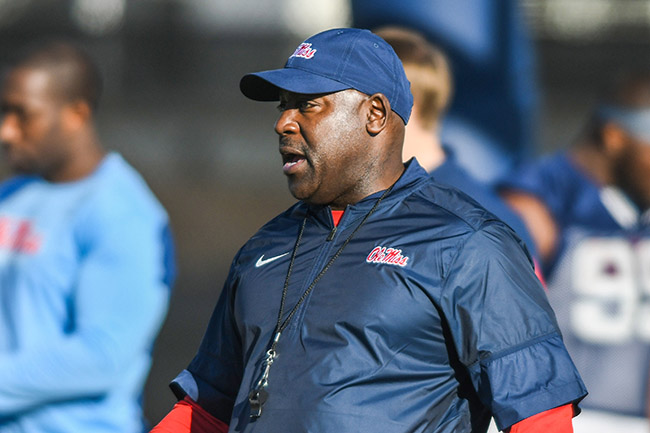 Everybody looks good running around in shorts and helmets, so Wesley McGriff is reserving judgment on how his players are executing the physical part of their new defense until they put on pads.

But Ole Miss’ first-year defensive coordinator has been impressed with how quickly the Rebels are picking it up mentally.

Ole Miss is in the early stages of installing McGriff’s defense with just two spring practices in the books. McGriff, who left his job as Auburn’s secondary coach in December to replace the retired Dave Wommack, is putting in a multiple scheme that will base out of a 4-3 but can deviate based on the offensive personnel.

McGriff has thrown a lot at his new players, and he likes the way they’re absorbing it so far.

“I think the guys are doing a tremendous job of grasping the information,” McGriff said. “More than anything, they’re doing a good job of retaining it. It’s translating over to the field. That’s good to see.”

Not everything has been perfect. McGriff said the players haven’t been immune to the usual kinks that have to be ironed out while learning a new system as Ole Miss tries to move on from the one that broke down last season. The Rebels ranked 111th nationally in total defense, 120th in run defense, 126th in red-zone defense, 96th in sacks and 95th in forced turnovers.

The positive, McGriff said, is players aren’t compounding their mistakes.

“The one thing that’s really been pleasing is they certainly go on to play the next play,” McGriff said. “They’re not letting that first play beat them twice.”

Myles Hartsfield and Montrell Custis are both getting looks at cornerback with injuries thinning out the position.

Both took snaps there during Thursday’s practice. Hartsfield started every game at safety last season as a true freshman while Custis spent most of the season as a backup at nickel and special teams contributor.

Ole Miss was already without starting corner Ken Webster, who’s still recovering from the season-ending knee injury he suffered in the opener against Florida State, before Jalen Julius fractured his arm during Tuesday’s first practice, but McGriff said the moves are also part of evaluating his personnel in the secondary. Hartsfield has also gotten reps at Star, the nickel corner position referred to as the Huskie in Wommack’s defense.

“You look at their skill set and just look at the way they move around,” McGriff said of Hartsfield and Custis. “We’ve got the right guys on the bus. Now we have to make sure we get them in the right seat. What you don’t want is to have a guy at corner on second team but he’s your best Star inside. Right now, we’re telling everybody to prepare yourself to go inside and play Star.”

McGriff said he’s been pleasantly surprised with how Hartsfield has taken to the position.

“He’s done a tremendous job out on the corner playing with confidence, contesting the ball, very, very strong at the catch point,” McGriff said. “He’s showing that he has the ability to play at a high level. We as a coaching staff have got to make sure that we continue to put him in a situation where he can play at a high level.”