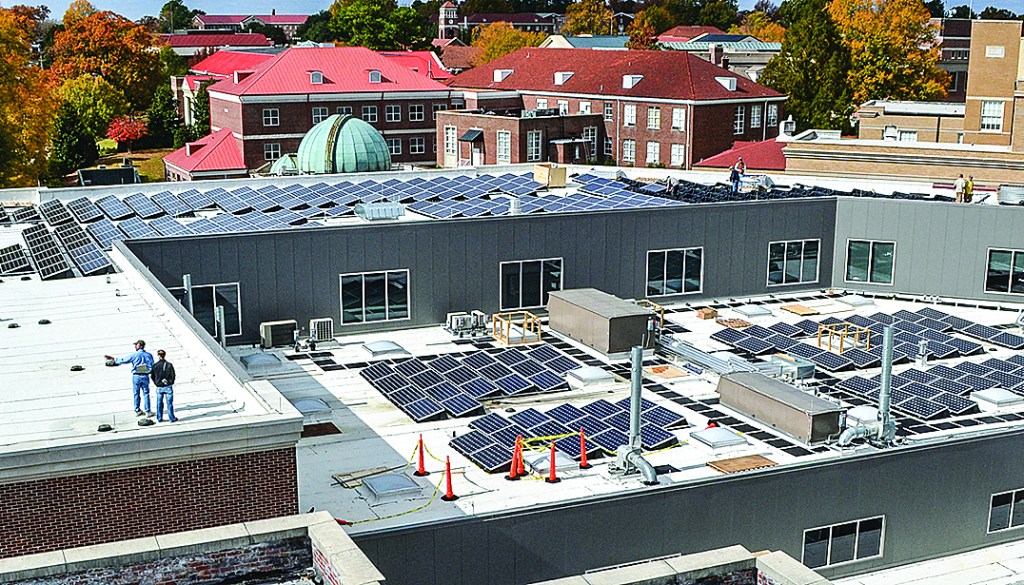 The University of Mississippi is committed to the use of renewable energy sources, including the installation of more than 400 solar panels on the Haley Barbour Center for Manufacturing Excellence. Photo by Robert Jordan/Ole Miss Communications

The University of Mississippi has offset a portion of the electricity it uses through the purchase of renewable energy certificates.

The purchase, which came about as a recommendation of the UM Energy Committee, allows the university to lower its carbon footprint, support the development of renewable energy technologies and practice resource stewardship, a tenet of the UM Creed.

“RECs are a simple and efficient way to immediately integrate renewables into an energy portfolio,” said Larry Sparks, vice chancellor for administration and finance. “This is an important next step for UM that complements our long history of increasing energy efficiencies, lowering energy utilization rates and investing in renewable energy installations on campus.”

The university purchased 3,835 RECs for $1,800, which is 0.02 percent of the overall electricity bill. This offset 3 percent of institution-wide electricity use from fiscal year 2016.

“(This) is a way to demonstrate that the University of Mississippi supports the production of electricity from clean, renewable resources,” said Ian Banner, chair of the Energy Committee, director of facilities planning and the UM Office of Sustainability, and university architect.

“As well as making a contribution to a cleaner world, we feel this is an educational opportunity to show that there are alternative ways of producing power.”

It is estimated that the university’s RECs have an environmental impact similar to growing 69,848 trees per year for 10 years or not using 6,240 barrels of oil, according to 3Degrees Inc., the company through which Ole Miss purchased the certificates.

When electricity is produced from a renewable generator, such as a wind turbine, two products are created: the energy, which is delivered to the grid and mixes with other forms of energy, and the REC. Because renewable energy delivered to the grid cannot be distinguished from electrons of nonrenewable resources, the REC is a way to track the renewable electricity – it acts like a receipt for owning the environmental benefits associated with the generation of renewable energy.

“It is not practical to set up a wind or solar farm, just as we wouldn’t build a traditional power station to provide the university’s electricity,” Banner said. “Rather, we purchase electricity from the producer, usually the local power supplier.

“By purchasing RECs, we are able to certify and verify that a percentage of our electricity is tracked back to its source. In our case, the source is a provider that produces electricity using wind turbines that do not create greenhouse gas emissions such as CO2.”

Besides the REC purchase, the Ole Miss campus is home to renewable energy installations that include more than 400 solar panels on the Haley Barbour Center for Manufacturing Excellence and geothermal heating and cooling at Insight Park.