Oxford boys finally get past Wayne County, advance to 5A semis 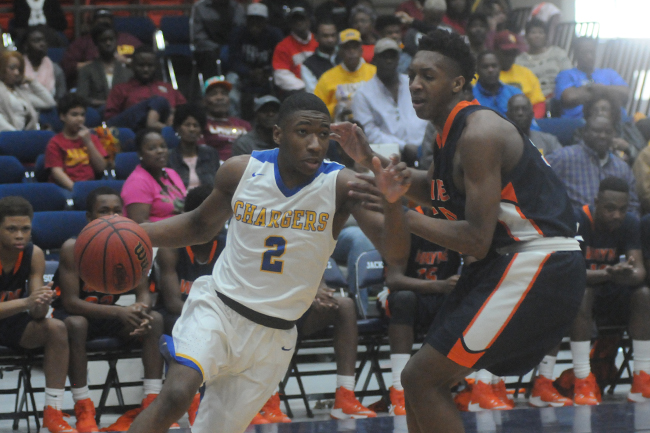 Oxford High's Terry Williams (2) drives against Wayne County's William Gaines Jr. (50) in MHSAA Class 5A playoffs at Jackson State in Jackson, Miss. on Friday, March 3, 2017. Oxford won 58-48 and will play Laurel in the semifinal round on Tuesday at the Coliseum.

JACKSON — The monkey is off the Chargers’ back. The Oxford High boys basketball team defeated Wayne County 58-48 in Friday’s MHSAA Class 5A quarterfinal round at Jackson State University to advance to the semifinal round. It is the first time in three consecutive tries the Chargers have eliminated Wayne County after being ousted by the War Eagles the past two seasons. The first two encounters ended by a combined four points, but Oxford made sure this year’s was not a nail-biter as Jarkel Joiner dunked the ball as time expired for the double-digit win.

The Chargers (25-7) will play Laurel on Tuesday at 8:30 p.m. at the Mississippi Coliseum for a berth into the 5A state championship game on Friday (8 p.m.)

“It mean’s a lot,” Joiner said of the win. “It’s basically another day at the office for me. …I’m very happy.”

The turning point of the game came at the start of the fourt quarter. Wayne County (18-13) closed the third quarter on a 9-0 run to take a 41-35 lead into the final eight minutes of the game. From there it was all Oxford. The Chargers used a 23-point fourth quarter, holding the War Eagles to only one field goal and five made free throws. Joiner scored 10 points in the fourth quarter.

“We had a quick come to Jesuse talk,” Oxford head coach Drew Tyler said of what he discussed with his team between the third and fourth quarters. “I really focused on my seniors, Joiner and Williams. I max out our players, playing five guys pretty much. We’ve been doing that all year. …I thought we did a real good job contesting shots out of the man and zone (defenses).”

It was not smooth sailing the entire game for Oxford, who committed 13 turnovers, with the bulk of them happening in the first quarter. Careless passes, missed catches and balls going through players’ hands were some of the miscues. The game did not get away from them because of it, with Wayne County scoring only nine points off of them and turning the ball over 13 times themselves.

“Just being in Jackson,” Joiner said. “Do or die. Playoff jitters. We got past that and got this W.”

Oxford played Joiner, Willams, Pegues and Drew Bianco the entire game, rotating only three other players in. Their seminal opponent Laurel (21-8) played all 19 players on their roster at some point during their 75-46 win over Holmes County Central earlier on Friday.

“Laurel, they sub by committee,” Tyler said. “I’m probably going to have go into my bench and use a rotation and rest some of our bodies. Keep them out of foul trouble. But, they can only put five guys out there like we can.”

Oxford could be without a starter come Tuesday night as Hiram Wadlington went down with a knee injury in the final minute of the game. Tyler said Wadlington had aggravated a meniscus injury from football and would get it evaluated back in Oxford over the weekend. Wadlington finished the game with two rebounds in 31 minutes of actions.

“(Wadlington’s) one of the top running backs in Mississippi and leader on the floor for us,” Tyler said.