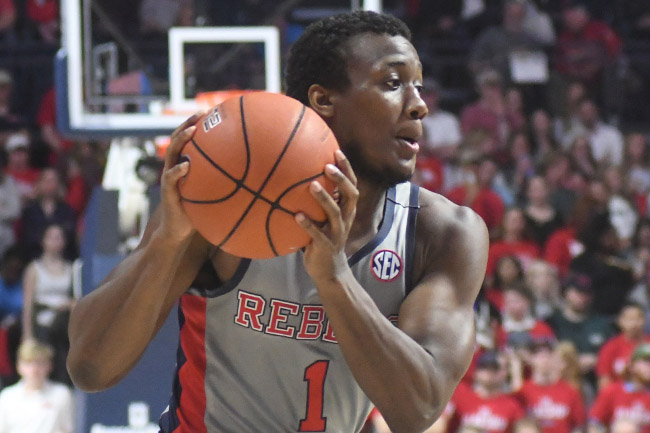 Ole Miss picked up its best win from an RPI standpoint Saturday without Deandre Burnett, and head coach Andy Kennedy said he’s not sure if the Rebels will have their leading scorer to begin the postseason.

Burnett sat on the bench in street clothes during Ole Miss’ 75-70 win over South Carolina in both teams’ regular-season finale while nursing a leg injury. Kennedy said Burnett, who’s averaging 16.5 points and 3.2 assists, was a game-time decision after the junior guard complained of knee pain during Thursday’s practice and was held out Friday.

Kennedy said he doesn’t know the extent of the injury and has “no idea” if Burnett will be able to play in the Rebels’ SEC Tournament opener Thursday night. The Rebels, who locked up the No. 6 seed with Saturday’s win, await the winner of Wednesday’s game between Auburn and Missouri.

“We’ll check him out thoroughly and find out what’s going on,” Kennedy said.

Kennedy said Burnett originally took a knee to the thigh against Missouri last Saturday that caused some swelling, but Burnett played 23 largely ineffective minutes in a 70-55 loss at Alabama on Wednesday. He shot 0-for-7 from the field and finished with a season-low two points.

“We came back and I was not real pleased with the way we executed,” Kennedy said. “I knew what a bloodbath this would was going to be (against South Carolina). … We practiced Thursday pretty diligently, and he practiced. He moved around a little slow and said his knee was bothering him.”

Cullen Neal helped freshman Breein Tyree log the minutes at the point in Burnett’s absence. Tyree had 19 points, three assists and eight turnovers in 36 minutes while Neal had 11 points and three turnovers.