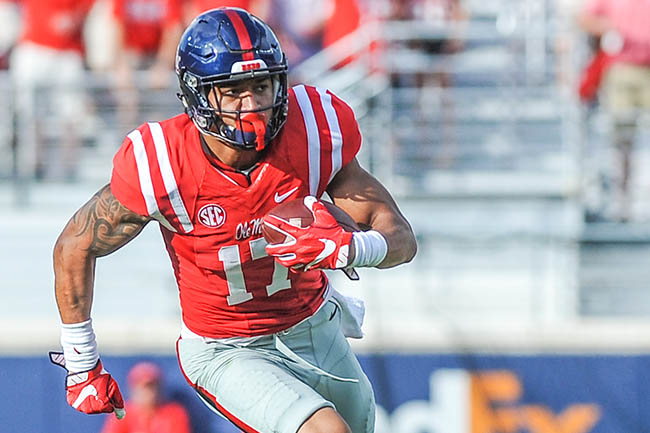 Evan Engram displayed another reason Saturday why he’s not a prototypical tight end.

The former Ole Miss standout ran the 40-yard dash in 4.42 seconds at the NFL scouting combine being held at Lucas Oil Stadium in Indianapolis, blazing the fastest time among tight ends. Engram ran a 4.43 on his other attempt.

Engram was also the only tight end to post a sub-4.5 time. Alabama’s O.J. Howard turned in the next-fastest time with a 4.51 while Iowa’s George Kittle ran a 4.52.

The 6-foot-3, 238-pound Engram has always been viewed as a tweener who may project more as a slot receiver at the next level because of his smaller stature, but Engram put to rest any concerns about his speed at either position.

Engram was Ole Miss’ leading receiver last season with 65 catches for 926 yards and eight touchdowns. Awarded the Conerly Trophy as Mississippi’s best college football player, Engram ended his career as the school’s all-time leader in receptions and receiving yards by a tight end.

Adeboyejo matched Engram with an official time of 4.42 in the 40.

The 6-3 Adeboyejo started all but one game at the outside receiver spot last season, finishing with 35 catches for 456 yards and a touchdown. His best season came as a junior when he caught 38 passes for 604 yards and seven scores.

The fastest time among receivers came from Washington’s John Ross, who blazed an official 4.22 to set a combine record. Ross broke the mark set by former NFL running back Chris Johnson, who ran a 4.24 in 2008.