Oxford Grillehouse, jcg apparel will have to be partially rebuilt following damaging wreck 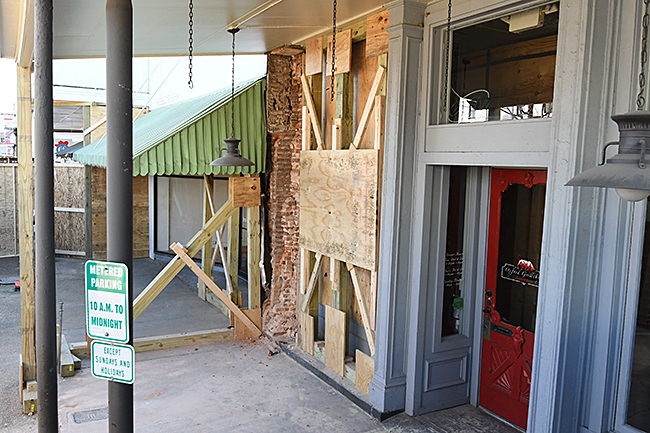 The wall buildings housing jcg apparel and Oxford Grillehouse, in Oxford, Miss. on Friday, March 3, 2017, are in need of repair after a truck wrecked into them on Monday, February 27, 2017. (Bruce Newman, Oxford Eagle via AP)

While most businesses affected by a crash from a pick-up slamming into the east side of the Square early Monday morning are now open for business, at least two storefronts will have to be rebuilt, according to city officials.

Shortly after the wreck, which was caused when the driver had a medical episode, shoring operations started on jcg apparel, Rowdy Rebs, Ajax Diner and Oxford Grillehouse to make sure the businesses were safe before they could reopen.

A pedestrian walkway was erected to allow safe passage for people walking along the east side of the Square near the affected businesses.

The businesses have all reopened; however, structural engineers discovered some separation in the bricks above jcg apparel due to a damaged load-bearing column, according to building official Randy Barber.

“The front walls are braced and stable,” Barber said Friday. “Structural engineers have inspected the damage and work to replace the column should begin early next week, if not today.”

The facades of both jcg apparel and Oxford Grillehouse will have to be rebuilt.

Both places are open for business but the front entrances are temporarily closed for safety reasons and the businesses only have access through their side or rear doors. Since they have only one entrance, the businesses’ occupancy levels were reduced by the Oxford Fire Department.

Lewis Herrington, owner of jcg apparel, said the construction to rebuild the storefront could take months.

“We are currently taking phone orders and email orders,” he said. “We will waive all shipping fees and ship for free. We will be open at our normal hours on Monday but the only entrance will be through the back door in the alley. Obviously, it’s not the most ideal situation but we have no alternative.”

The driver reportedly suffered a seizure while heading westbound on Jackson Avenue. After veering left, he went between two crape myrtles on the Square, knocking over an electric box.

The pick-up then struck a support to an overhang at Oxford Grillehouse and a parking meter before crashing into the corner of the restaurant and jcg apparel.

The truck bounced off the building, knocking over a light pole and another parking meter before coming to rest against a support for the balcony at Wilson Law Firm above Ajax Diner.

The driver was taken to Baptist Memorial Hospital-North Mississippi where he was treated for minor injuries. No one else was injured during the crash.