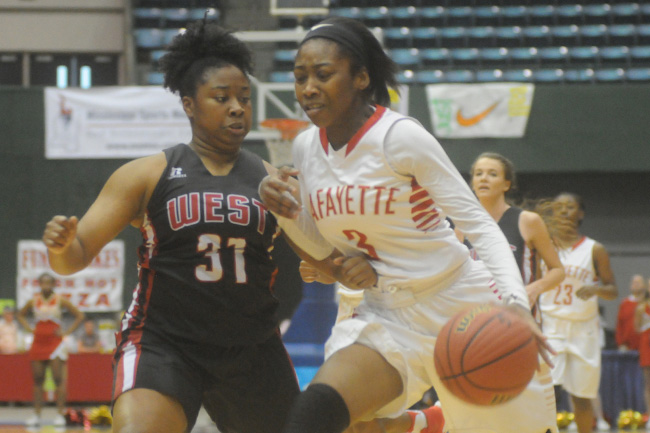 JACKSON — Shayne Linzy felt his team was good enough to play for a state championship this year. The Lafayette girls basketball team left little doubt in Monday afternoon’s MHSAA Class 4A semifinal game, defeating West Lauderdale 51-21 at the Mississippi Coliseum. The Commodores will play Ripley on Thursday at 6 p.m. for the Class 4A title.

It is the second time in program history the Lafayette girls have reached the state championship. The first came in 1982 when the Commodores defeated Stone 42-38 to capture the Class A title.

“This has been exciting,” Linzy said. “The girls I really think felt like they thought we could get here but at times didn’t really feel sure of themselves. But as the season went on, the light kind of went on in their eyes and they felt, ‘Hey, we can do this.’ … It’s been neat to watch the maturation of these girls in the playoffs.”

The Commodores jumped out to a 14-3 lead after the first quarter before the Lady Knights (22-13) responded with a 10-8 second quarter for a 22-13 deficit at halftime.

“The first quarter, we came out and did all the things that we were supposed to do,” Linzy said. “The second quarter, (West Lauderdale) made a couple little adjustments offensively and defensively and we saw that, but I didn’t want to change anything up but we did anyway. …We talked about that at halftime, getting back to the easy stuff. The fundamentals, blocking out, attacking the glass, not settling for 3s.”

It was back to basics for Lafayette, whose offense exploded in the third quarter for 21 points while their defense held West Lauderdale to only two buckets. The Commodore defense was stingy all afternoon, causing 27 Lady Knight turnovers. Azariah Buford had nine steals while Shaniyah Buford and Kimaya Dizon each had two steals.

“They responded and they responded well,” Linzy said. “We told them, ‘Look, we can make this a long game or we can make it a quick one. We’re going to have to do something here in the third quarter. It’s going to be y’all’s choice.’ Credit the girls.”

It will be an all Region 2-4A matchup as Lafayette and Ripley, which defeated Byhalia 45-43 in Monday’s earlier semifinal, will fight to be the state’s best girls team in Class 4A. Lafayette has played Ripley (19-10) twice this season and the Commodores defeated the Tigers both times with relative ease with the margin of victories around 28.5 points.